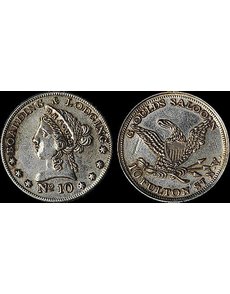 A circa 1850 store card from D.H. Gould’s Saloon and Hotel in New York City recalls the issuer’s long-lived business.

David H. Gould operated a lodging and eating house at 10 Fulton St. in New York before the Civil War. He styled his place “Gould’s House of Refreshment” in a local advertising directory, which stated that he provided both meals and lodging.

Another such directory recommended “Gould’s Dining Saloon” menu at 10 Fulton because “one knows exactly what he has to pay before he gives his order.”

Russ Rulau catalogs a 28-millimeter brass (NY-287) or silvered brass (NY-287A) Gould’s Saloon store card in his Standard Catalog of United States Tokens, 1700-1900. It has the familiar gold coin look-alike Liberty and Eagle designs, made by Scovill Manufacturing Co., that Rulau dates circa 1848 to 1851. D.H. GOULD appears on the headband that reads LIBERTY on the gold coins.

This location in the heart of New York’s booming financial district provided Gould a front-row seat to the lines of patrons purchasing stamps for use as small change in summer 1862. So it was natural he would provide customers their change in these advertising stamp envelopes that were circulated in the absence of hoarded government small change.

The only known example, formerly in the collection of David Proskey, according to my forthcoming reference, Civil War Stamp Envelopes, the Issuers and Their Times, exhibits messy grease-stained fingerprints, very likely Mr. Gould’s.

A decade later, Gould’s eating house was located at 31 Nassau St. On a Friday night in March 1871, police were summoned to the scene by an explosion they later found out had been a dynamited safe at the nearby New York Bank of Commerce.

However, on investigating, the coppers found several mechanics at work at Gould’s several doors away. The workmen were “repairing the boiler and using hammers,” which the cops considered to be the source of the noise witnesses had heard. So the lawmen quit the investigation. Evidently the actual burglars were spooked by the appearance of the police, and failed to return to the bank to get their loot. The blown safe and nearly successful burglary were discovered the following Monday morning by the bankers.

Daniel Gould’s New York City restaurant proved to be a long-lived affair. On June 25, 1882, the New York Whole Truth and Nothing But the Truth reported, “Mr. D.H. Gould has on exhibition at his restaurant, Thursday, one of the largest lobsters ever caught. It weighs twenty-three pounds and measures three feet from claw to fin. Age, 20 years.”