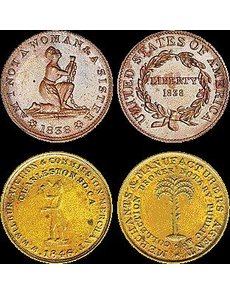 1838 slave token images courtesy of Stack’s Bowers Galleries; Charleston token from author’s colllection.The “Am I Not a Woman & a Sister” anti-slavery token of 1838, top, was made in large numbers and is easily found today. Bottom, a brass token of slave auctioneer W.W. Wilbur of Charleston, S.C., from 1846.

Political, religious and humanistic opposition in England led to the abolishment of slavery in England in the late 18th century. However, that “peculiar institution,” as many called it, lingered in America. Slave labor was considered essential to maintaining “the wealth of the south.” Without slaves, the economy might collapse.

In the North, opposition to slavery arose early, during the birth of our nation. However, it was accepted by most. George Washington and Thomas Jefferson were among the great American figures who owned slaves. Among the first serious movements to benefit African Americans were successful efforts in 1811, 1816 and 1817 by Paul Cuffee, a well-to-do New England ship-owner, who organized and helped finance the journey of free former slaves to go to Sierra Leone, a British colony in the continent of their or their forbears’ birth, to live in freedom and establish themselves.

Cuffee died in 1817. Perhaps inspired by his efforts, in 1816 the Society for the Colonization of Free People of Color of America, popularly known as the American Colonization Society, was formed.

The group assisted with the establishment of the aptly named Liberia on the Atlantic coast of Africa in 1821 and 1822, with its capital named Monrovia, for President James Monroe. The thought was to support free blacks and, if they desired to, to assist them in returning to their native land. More than 10,000 free blacks emigrated to Sierra Leone and Liberia over the next several decades.

Slavery endured in the South, as we all know. In the 1850s, Harriet Beecher Stowe’s Uncle Tom’s Cabin helped move the abolition cause into wide public view as people read about how Eliza and her family made their escape from slave owners. The defining moment was Nov. 4, 1860, when Republican Abraham Lincoln was elected as president. His firmly declared pro-abolition stance was unacceptable to many Southern leaders. On Dec. 20, South Carolina withdrew from the Union, followed quickly by others, who in January 1861 formed the Confederate States of America.

In connection with slavery, many tokens and medals are found in American numismatics, a wide selection of paper money (such as depicting slaves picking cotton), and a few commemorative coins.

I illustrate two tokens from the early 19th century, one the very famous AM I NOT A WOMAN & A SISTER token from 1838, and the other a relatively unknown store card issued by W.W. Wilbur, an auctioneer who sold blacks to the highest bidders in Charleston in 1846.