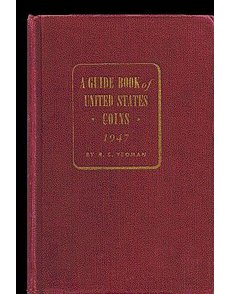 First edition of Red Book, with cover date of 1947, is key date to the set.

In the marketplace for A Guide Book of United States Coins (the “Red Book”), the key to this 65-volume (and counting) set is the first edition of 1946 (cover date 1947), which comes in two flavors.

Whitman’s first printing was only 9,000 books and quickly sold out. For the second printing — also of 9,000 copies — R.S. Yeoman changed one sentence on Page 135, which is the only way to tell the two printings apart!

Since this was a reference book, most first editions were used to death: bindings broken, pages dog-eared and gilt lettering rubbed off the covers. Copies of either printing with unfaded covers and bright gilt are rare birds, and regularly sell well north of $1,000 in numismatic bookseller auctions.

For those unwilling to spend that much, Whitman, in 2006, produced a Tribute Edition (an exact facsimile of the first printing), which sells for $17.95.

The third edition (1949), is rarer than the second, bringing about $375 in Fine condition. This edition is notorious, however, for muted gilt, so a bright copy could approach $1,000 at auction.

The rarest of all Red Books in collectible condition is the fifth edition (1952-1953), for literature dealers unanimously report having handled more firsts than fifths. The fifth edition, however, sells for about half the price of either printing of the first, suggesting that it is undervalued. It is hard to find a copy of the fifth that hasn’t been used to the point of (as large cent collectors say) “scudziness.”

Over the decades, the Red Book has grown bigger and better, and its print runs have expanded along with its collector base. All editions after the 1950s are common, generally found in top condition, and usually reasonably priced.

Collectors’ compulsion to assemble complete sets, however, makes even recent editions desirable. If you collect error coins, you will delight in collecting error Red Books. The most famous (and one of the rarest), occurs in the 16th edition (1963), which is missing Page 237, but has two Page 239s. A cockeyed printing exists for the 39th edition, and even a “doubled die” cover printing of the 15th is available. The most numerous errors are the inversions, in which the text of the book is bound into the covers upside down. Some 23 different editions have been found with inverted printings, from the 19th (1966) to the 59th (2006).

Yeoman was often approached at shows by people clutching inverted printings. Invariably, he offered to replace the error with a perfect copy, only, just as invariably, to be told, “No you don’t, either!”

If you are tempted to hop aboard the Red Book collecting bandwagon, an indispensable “guide book to A Guide Book” exists, namely Frank J. Colletti’s A Guide Book of The Official Red Book of United States Coins: History, Rarity, Grading, Values, Varieties. All of the facts in this column were checked against this superb volume, which is available from Whitman for $18.95 in paperback. It contains endless Red Book data and lore, including year-by-year price reports, rarity estimates, special editions information and even a photo of the legendary 30th edition that Ken Bressett impishly bound in fur as a gag gift to Q. David Bowers! These extraordinary editions will be the topic for the next installment of “The Numismatic Bookie.”