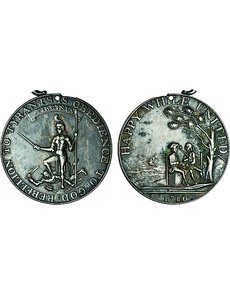 The 1780 Virginia Happy While United medal was unknown in silver until the cast example illustrated here was recently discovered.

A recently discovered unique 1780 Virginia Happy While United medal cast in silver was sold at auction Sept. 14 for $109,250.

According to the Stack’s Bowers auction lot description, the medal was personally ordered and overseen in 1780 by Virginia’s governor, Thomas Jefferson.

The medal is believed to have been produced in either Richmond or Williamsburg by Robert Scot, a future U.S. Mint engraver.

According to the auction lot description, “the Virginia Happy While United medals were the diplomatic ribbon around the relationship between Jefferson’s Commonwealth and the major [Indian] tribes of the South during the American Revolution.”

The piece sold in 2009, a mold pattern from which the silver examples were produced, sold for $92,000 and is in the collection of the Colonial Williamsburg Foundation.

John W. Adams wrote in the 1991/1992 American Journal of Numismatics that likely a dozen of the silver medals were initially cast in 1780 and more after that date. Adams writes the medals were still being distributed as peace medals as late as 1787.

At the time of his article, Adams was unaware of the survivorship of any of the silver Virginia medals, but stressed, “Almost certainly, one or more silver medals have survived and will some day come to light.” ¦