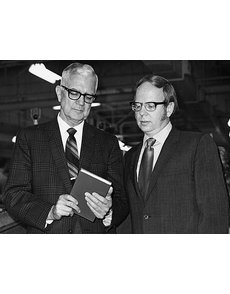 The most common numismatic book (21 million copies sold!) is also the most collectible one: A Guide Book of United States Coins by R.S. Yeoman, also trademarked as The Official Red Book. Interestingly, though, “Yeoman” was not the author’s real name, and when this yearly series started, “Red Book” wasn’t part of its title.

The man who first compiled the premier retail price guide for American coins, born Richard S. Yeo, was Whitman’s resident marketing expert. It was Yeo who popularized Whitman’s line of coin boards and who coordinated the company’s first foray into numismatic publishing, A Handbook of United States Coins (the wholesale price guide fondly known as the “Blue Book”).

When he compiled the first Blue Book (1941, cover date of 1942), Yeo adopted the pen name of “Yeoman,” probably from a desire to preserve his privacy. R.S. Yeoman, however, proved much more adept at editing price guides than at blending into the background.

The coin hobby expanded rapidly during the 1950s and 1960s, and the sales of both Red and Blue books kept pace, as did the fame of their editor. By 1965, the 19th edition of the Guide Book sold a staggering 1.2 million copies, a record unmatched since, and the quiet Mr. Yeoman had become “Mr. Red Book,” the coin hobby equivalent of a rock star.

He was so successful because he always recruited the best brains in numismatics to be contributors and editors, thus improving every edition over its predecessor. In 1956, a bright young collector named Ken Bressett had the moxie to present Yeoman with a list of errors he had found in the latest edition; an impressed Yeoman promptly engaged him as a freelancer for the next one. When Yeoman was ready, in 1969, to hand over the editorial reins, Bressett took them, and holds them to this day.

Ken Bressett’s stewardship has been so successful that he is widely known as “Mr. Red Book,” just as his mentor was 40 years ago. It was on Yeoman’s watch that Red Books first became collectible, and during Bressett’s tenure, collectors’ passions have turned obsessive.

During the late 1960s, pioneering numismatic booksellers like Frank Katen and George Frederick Kolbe began to regularly offer older editions of the Guide Book in their auctions and price lists. By the start of the next decade, collectors were trying to piece together complete sets, in uniform condition, with unfaded red covers and gilt (the gold cover lettering) still brilliant. The keys to such a set are the first five editions, spanning the years 1947 to 1953 (two of the five editions covered two-year periods). The king of them all is the first edition — or, more accurately, the first editions — of 1947. Next month, we will tour the market for Red Books, and discover some surprising information — including the thriving market in Red Book error collecting!