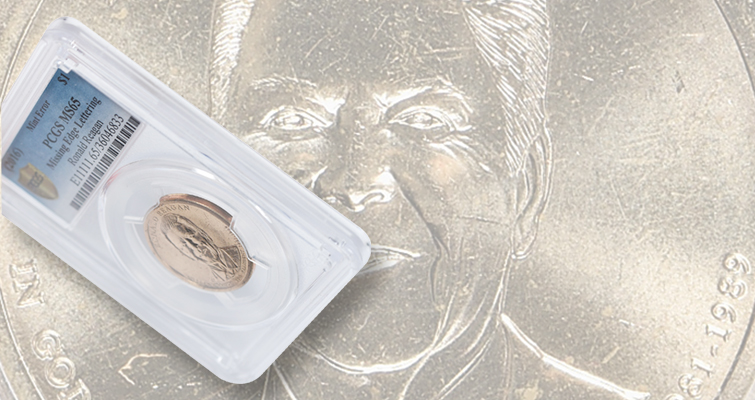 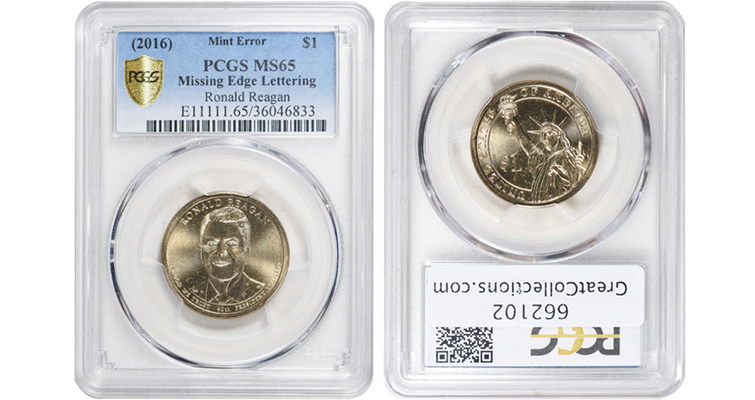 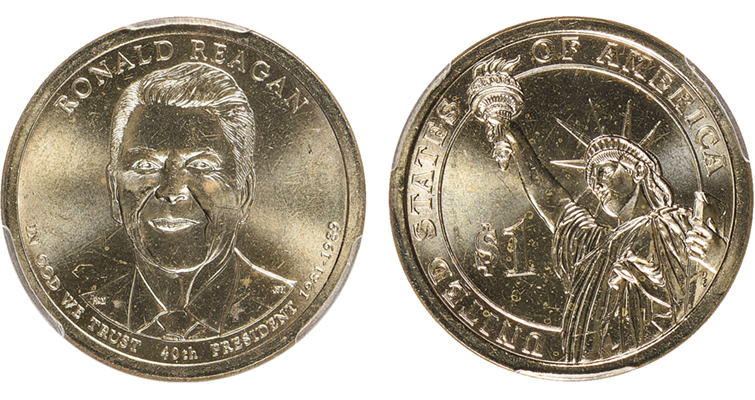 The recent discovery is the first reported example of a Reagan Presidential dollar missing its mandated incuse edge legend, date and Mint mark.

What is considered the only reported example of a 2016 Ronald Reagan Presidential dollar missing the required incuse edge inscription is offered in an online auction by GreatCollections.

Professional Coin Grading Service has authenticated, graded and encapsulated the coin as Mint State 65. The coin is from the Denver Mint assemblage of coins in the set.

The opening bid placed on the coin is $1, but bidding is expected to reach several thousand dollars by the time the auction closes, according to some error coin specialists.

Ian Russell, president of GreatCollections, said the error was discovered recently by an East Coast dealer who was examining coins in 2016 Uncirculated Coin sets to determine whether any would be worth submitting to third-party grading services for grading.

Instead of the plain edge that the error exhibits, the intended incuse edge device features the date, Mint mark and E PLURIBUS UNUM.

Integration of the edge lettering process as the final step in the production line was accomplished in 2008, the year after the Presidential dollar coin series was introduced.

In 2007, Presidential dollars were struck and then transported within the Denver and Philadelphia Mints to a separate station where the struck coins were fed into special machinery that applied the mandated edge device. Most of the series’ multiple missing-edge-lettering errors occurred during that first year of circulating coinage production, 2007, when bins of coins were physically moved from the presses and, without being fed through the edge application machinery, were transported to the bagging station.

Presidential dollars are known missing edge lettering altogether, as well as appearing with overlapping edge devices and, in some instances, with edge devices that are inverted and overlapping.

The coins struck for inclusion in the annual sets are produced in a higher quality and on other coinage presses than those struck for circulation.

The coins for Uncirculated Coin sets are struck on presses operated at a slower speed and with a single set of dies oriented to strike vertically. After striking, dollar coins are automatically fed into edge lettering equipment integrated at the end of the production line.

Circulation strikes are produced on presses with a single set of dies striking horizontally at the rate of up to 750 coins per minute. After being struck with a plain edge, dollar coins enter the edge application machinery, which is now integrated into the press operation, where they receive their incuse edge inscription. 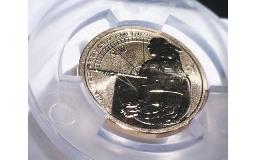 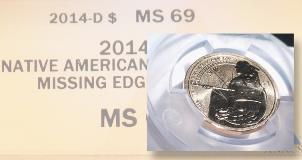 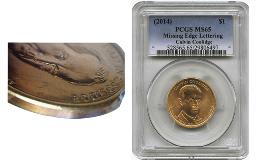