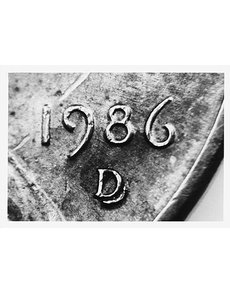 This 1986-D Lincoln cent exhibits a split along the D Mint mark, and resultant corrosion, that somewhat mimics a repunched Mint mark. The coin shown is representative of the problem and is not the reader’s cent.

I could use some help here on this 1992-D Lincoln cent. Do you have any thoughts, ideas or feedback about the D Mint mark? All information is desired.

Reader Price’s 1992-D Lincoln cent is not a die variety or even an error. Instead, it exhibits a form of surface degradation found on some copper-plated zinc cents.

What we see on the coin is exposed zinc from the coin’s core peeking through overly thin copper plating that split along the curve of the D Mint mark, with a resultant corrosion of the surfaces from the zinc’s exposure to the atmosphere.

Copper-plated zinc cents were released in 1982 as a replacement for the 95 percent copper cents that had been issued in every year since 1864 but one (1943, when copper-coated steel cents were issued). The copper plating is thin (the copper used in the composition is just 2.5 percent of the total weight of the coin).

Error coin specialists began receiving reports of poor surfaces on the new zinc-plated cents not long after they entered circulation in 1982, the most prominent being bubbled surfaces resulting from gasses being trapped between the zinc core and the copper plating. This bubbling problem was especially prevalent on the cents of 1982 and 1983, and seen somewhat less on later cents.

When the copper tears, the mostly zinc core is exposed (the core contains a miniscule 0.8 percent copper; the rest is zinc).

For cents, when the zinc and copper, in contact with each other, are exposed to the atmosphere, galvanic corrosion occurs. The result can be substantial deterioration of the cent’s surfaces, as many collectors have witnessed.