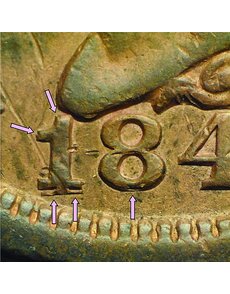 The 1 and 8 show strong repunching (see arrows) on this 1847 Coronet cent submitted by Robert Pelletier. 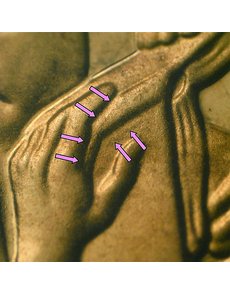 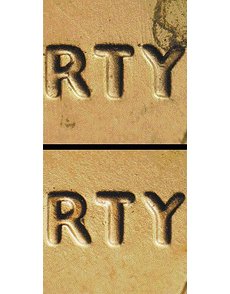 In the May 21 installment of this column, I featured and illustrated a 1928-D Standing Liberty quarter dollar with a doubled die reverse that I now have listed as 1928-D 25¢ WDDR-001. I noted that it was submitted by Coin World reader Robert H. Knauss.

What I should have also noted is that Mr. Knauss is the author of a 2004 book titled Standing Liberty Quarters: Varieties and Errors. The book is still available from numismatic book sellers and I am honored to have received a coin submission from such a prestigious Coin World reader.

For this month’s column, I focus on an 1847 Coronet cent that shows repunching of the first two digits in the date, submitted by reader Robert Pelletier. Prior to the 20th century, U.S. Mint die makers punched the digits of the date directly into the working die. It sometimes took more than one tap of a mallet on the digit punch to leave a satisfactory impression of that digit in the die. If movement of the punch occurred between taps of the mallet, doubling would occur on that digit.

Coin World reader James A. Porter submitted a Proof 2009-S Lincoln, Formative Years cent with a nice doubled die reverse. Strong doubling shows above Lincoln’s index finger and a light impression of the book spine can be seen to the right of the normal book spine. I have this one listed as 2009-S 1¢ Pr WDDR-005.

The first 2012 doubled die variety that I am aware of was submitted by Coin World reader Craig Simpson. His cent shows strong extra thickness on the letters of LIBERTY, especially the TY. Light extra thickness also shows on the date. This one is now in my files as 2012 1¢ WDDO-001.