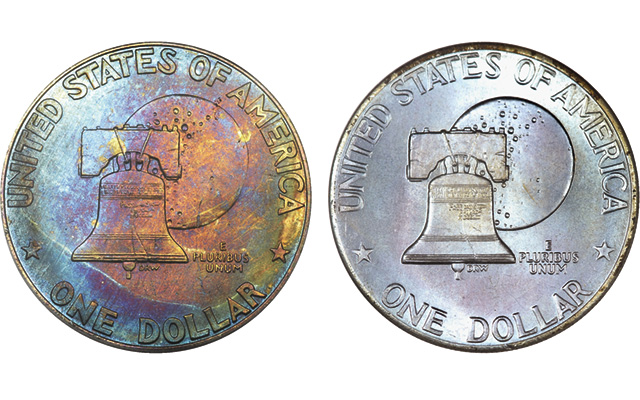 Changes were made to the lettering during production of the Bicentennial dollar, as shown, but none appear to have been made to the quarter dollar and half dollar. Images courtesy of Heritage Auctions.

Changes in the lettering on coins can occur in several ways, either through deliberate changes made to the tooling (letter punches, for example, or hubs) used in making working dies (used to strike coins) or through incidental wear to a hub or a die from use over time that can lead to the erosion of the metal along the letters.

During the period from 1973 to 1977, tooling changes were made to the Washington quarter dollar, Kennedy half dollar and the Eisenhower dollar through the introduction of new hubs, but were these changes reflected mid-way through the production of the Bicentennial coins?

As is well known, the Eisenhower, Bicentennial dollar underwent significant changes mid-way through its 1974 to 1976 production period, the most obvious being a significant revision to the lettering on the reverse. The lettering is significantly thicker on the first version of the reverse, found in the 1975 annual sets, than on the second version, used for the 1976 sets.

But what about the other two denominations?

Q. David Bowers’ Guide Book of Washington and State Quarters cites introduction of a new obverse hub for that denomination in 1974, used a year before the switch to the Bicentennial quarter dollar, plus another new hub in 1976 for the Bicentennial coin. The changes to both hubs involved the lowering of relief, and for the 1976 hub, some sharpening of details; both kinds of changes can result in changes to the lettering. However, Bowers lists no changes that might have resulted in different lettering being used during the production of the Bicentennial quarter.

Die variety expert James Wiles, in his The Kennedy Half Dollar Book, identifies the Bicentennial obverse and reverse as the fifth designs (hubs) for the denomination, but identifies no hub changes for that coin during the production of the Bicentennial version.

If the two denominations in the reader’s sets do show differences in lettering, then an explanation other than hub changes is likely.