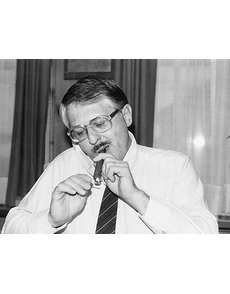 In this circa 1984 photo, Raymond N. Merena, while president of Bowers and Merena Galleries Inc., lights up one of his familiar cigars. 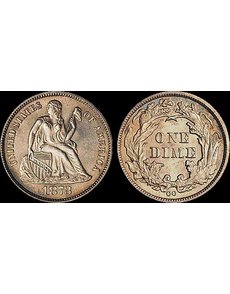 Among the coins sold during Merena’s tenure as president of Bowers and Merena Galleries Inc. was the unique 1873-CC Seated Liberty, No Arrows dime the firm sold in May 1996 for $550,000 as part of the Louis E. Eliasberg Sr. Collection. The coin was last sold at auction in August 2012 by Stack’s Bowers Galleries for $1.84 million.

It was perhaps fitting, when numismatist Raymond N. Merena retired from the hobby in 2000, that the Professional Numismatists Guild presented him with its Lifetime Achievement Award to recognize he dedicated nearly four decades of his life to the PNG.

Mr. Merena, 75, of Vero Beach, Fla., and Wolfeboro, N.H., died May 21 in Marblehead, Mass., from complications of Alzheimer’s disease. Mr. Merena not only dealt with his illness for 10 years, he also actively supported research and fundraising for a cure.

When partnered with numismatist Q. David Bowers for some two decades in Bowers and Merena Galleries, where Merena served as president, Merena helped bring major collections of United States coins to the auction floor, including the collections of Louis E. Eliasberg Sr., Walter H. Childs and Aubrey Bebee, and portions of the holdings of Virgil Brand and the Norweb family.

After Mr. Merena was diagnosed with early onset Alzheimer’s disease in 2003, he and his wife, Patricia, became advocates and fundraisers for research, understanding of the disease, and part of a research project at Penn Memory Center of the University of Pennsylvania in Philadelphia.

A native of Johnson City, N.Y., Mr. Merena was a graduate of Cornell University with a degree in mechanical engineering. He served for a time as an employee of the New York Electric & Gas Corp.

He entered numismatics in 1962 after becoming acquainted with Jim Ruddy, then Bowers’ partner in the Empire Coin Co. Mr. Merena was hired as Empire’s director of research, soon shifting into general manager duties.

In 1971, Merena became Paramount’s vice president, and subsequently its general manager as well.

In 1974, Mr. Merena was elected to Paramount’s board of directors. During his Paramount tenure, the company expanded from a staff of 24 to nearly 200 employees in Ohio, with five wholly owned foreign subsidiaries.

One of the employees Mr. Merena hired during his tenure was David W. Akers, who later became a prominent numismatist and author.

In the meantime, in 1971 Q. David Bowers and James Ruddy had formed a new business, Bowers and Ruddy Galleries, in Los Angeles. Ruddy retired from the firm in 1977, though the company continued to operate under that name into late 1982 before being dissolved when Mr. Merena and Bowers teamed up again.

Late in 1982, the two men together formed Bowers and Merena Galleries in Wolfeboro, N.H.

Bowers and Merena Galleries handled many rarities and “name” collections. Mr. Merena supervised the production of auction catalogs, among his many duties.

Merena was a life member of the American Numismatic Association. Merena unsuccessfully ran for a seat on the ANA Board of Governors in 1985.

During the 1980s, Merena served as an instructor at the ANA Summer Seminar.

Mr. Merena also served for a short period as a pricing analyst for Coin World.

He was a member of the American Numismatic Society and Numismatic Literary Guild.

During his numismatic career, Merena was keenly interested in counterfeit detection, and specialized in coins of the United States, Great Britain and Canada.

Upon learning of Merena’s passing, numismatic stalwart Harvey Stack, a competitor at Stack’s, commented by email to Q. David Bowers: “I remember him from the days of Empire Coin Co., to his work at Paramount, to his work with you and the forming of Bowers & Merena, his work with the PNG during my tenure and later as President, his interest to make the numismatic hobby grow, the various IAPN [International Association of Professional Numismatists] trips we met on, and the long friendship.

“It is friends like him who I always cherished, even [though] we were competitive, and all the years we met at conventions to exchange ideas.”

Upon Mr. Merena’s retirement in 2000, Bowers commented: “During the course of Bowers and Merena Galleries, Ray has always tended to the business end of things — permitting me to engage in the fun of writing books and catalogs, doing research and, of course, buying, selling and cataloging coins.”

Mr. Merena’s ownership interest in Bowers and Merena Galleries was later bought out when the firm was sold to and became a division of Collectors Universe in early 2000.

During his years in Wolfeboro, Mr. Merena was an active member of the community, donating land to community development, helping to establish the town’s annual musical festival, Great Waters, and supporting its World War II museum, the Wright Museum.

An accomplished pianist, Mr. Merena especially liked playing progressive jazz. He was a modest and reserved man, but always enjoyed lending his baritone voice to any gathering of singers.

Golfing in Florida and boating on Lake Winnipesaukee in New Hampshire were among favorite pastimes.

In addition to his wife of 51 years, Patricia, Mr. Merena is survived by a son, Mark Merena; two daughters, Caroline Merena and Sara Merena; and five grandchildren.

A memorial service for Mr. Merena will be held June 1 at All Saints Church, in Wolfeboro, N.H. Burial will be private.