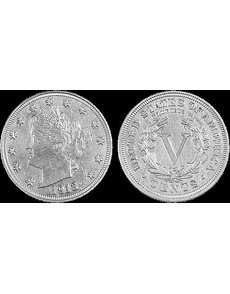 The Walton specimen of the 1913 Liberty Head 5-cent coin, one of only five known, will be on display at the ANA World’s Fair of Money in Philadelphia.

A massive bourse awaits attendees of the American Numismatic Association World’s Fair of Money, Aug. 7 to 11, in Philadelphia.

The convention, held at the Pennsylvania Convention Center, will also feature educational programs and events, as well as a collection of early American rarities assembled for the ANA’s signature Museum Showcase.

“We have an absolutely amazing show planned for this year’s World’s Fair of Money,” said Jeff Shevlin, ANA executive director.

The Museum Showcase marks the homecoming of the first coins made in Philadelphia, including the ANA’s 1792 half disme, which was created by the federal government in a Philadelphia sawmaker’s shop before the first U.S. Mint building was constructed. The ANA exhibit is complemented by an American Numismatic Society exhibit displaying the first issues of each coinage denomination struck by the Philadelphia Mint from 1792 to 1796.

Other rarities include a 1690 Massachusetts Bay Colony 20-shilling note in an exhibit of early American paper money (items courtesy of the ANA, Don Kagin, John Kraljevich and Kenneth E. Bressett); an exhibit of six historically significant early American medals, including two Libertas Americana medals, three Sansom medals and a diplomatic medal; the only known complete $4 Stellas set, which is valued at millions of dollars (courtesy Bob R. Simpson); and an array of 19th century high denomination notes from the expansive collection of Banco de Mexico. Other treasures to be on display include the ANA’s Idler/Bebee specimen of the 1804 Draped Bust dollar; the Walton specimen of the 1913 Liberty Head 5-cent coin, courtesy of the Walton family; and the 1787 Brasher doubloon, courtesy of Walter Perschke.

The U.S. Bureau of Engraving and Printing is observing its 150th anniversary with its 2012 intaglio print program. At the World’s Fair of Money, the BEP will release the second of three intaglio print cards featuring vignettes from its storied history. In addition, the BEP (at Booth 104) will bring its “Billion Dollar Display” of rare notes and give regularly scheduled demonstrations.

The U.S. Mint (sharing Booth 104 with the BEP), is observing its 220th anniversary and will sell a number of current Mint products. The Mint also recently unveiled a brand-new public tour at its Philadelphia location.

The 225,000-square-foot bourse also includes special sections for U.S., world and ancient coins as well as paper money. The Mint Promenade will feature 15 mints from five continents. As has been traditional at many conventions, visitors can purchase a World Mint Passport at the front entrance and collect coins from participating mints. Some mints will also discuss new issues during World Mint Theater presentations on the World Mint Stage, located in a special suite across from event registration.

The Collector Exhibits area gives exhibitors the opportunity to share their collections and research with others.

Stack’s Bowers Galleries is the official auction firm for the World’s Fair of Money and the Official ANA/PNG Pre-Show, Aug. 4 to 6 in the Pennsylvania Convention Center.

Money Talks, held Aug. 7, 9, 10 and 11, allow the nation’s top experts to present interesting, informative talks about all types of money. Topics include coins of the Olympic Games and Mexican numismatics as well as presentations steeped in Philadelphia-area history and numismatic flavor. For a full schedule of Money Talks lectures, visit www.worldsfairofmoney.com.

“Coin Collecting 101,” an informal 30-minute presentation for numismatic newcomers, will be held at various times.

Many of the more than 1,000 coin and paper money dealers attending the show will provide free, informal appraisals for visitors who bring in their coins and paper money.

Kerry Wetterstrom is the event’s general chairman and Catherine Bullowa is the honorary chairwoman. The Red Rose Coin Club is the host club for this convention.