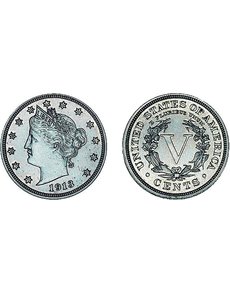 The Walton specimen of the 1913 Liberty Head 5-cent coin will be displayed at the ANA Fall National Money Show in Pittsburgh, Oct. 13 to 15.

The American Numismatic Association’s Museum Showcase, featuring rare and historic numismatic treasures, will be on display at the ANA’s 2011 National Money Show, set for Oct. 13 to 15 in Pittsburgh.

Located in Hall C of the David L. Lawrence Convention Center, the showcase will feature informative, museum-quality exhibits, many accompanied by Money Talks audio tours. Visitors can look for labels on these exhibits with the ANA’s cellphone audio tour number (719-325-7608) and tour stop number to hear talks from several numismatic writers, researchers and scholars.

The Museum Showcase is presented by the ANA at all of its conventions. Exhibits making their showcase debut in Pittsburgh include a fascinating display of Swedish “plate money” and a collection of rare artifacts from the French and Indian War.

The following is a list of exhibits to be displayed in Pittsburgh:

? The Midas Touch: Creating the First Coins — Coins were invented during the seventh century B.C. in the Kingdom of Lydia — part of modern-day Turkey. The first coins were made of electrum (an alloy of gold and silver) with lines impressed on one side and incuse depressions on the other. These first pieces were soon replaced by coins with more elaborate designs including animals and geometric motifs. This display will feature Lydian coins more than 2,600 years old. The exhibit is courtesy of Kenneth Bressett.

? The French & Indian War and the Foundation of Pittsburgh — In the late 1740s, William Trent established a successful trading post at the confluence of the Allegheny, Monongahela and Ohio rivers. It was an ideal place for conducting trade with nearby Indian villages, and both the French and British wanted the area. Thus the future site of Pittsburgh became a point of contention during the French and Indian War. Medals, coins and documents relating to the war and the founding of Pittsburgh will be displayed. The exhibit is courtesy of John Kraljevich.

? Swedish Plate Money — The Kingdom of Sweden minted “plate money” from the mid-17th to late 18th centuries. These copper pieces were produced due to a lack of silver and a wealth of copper in Sweden. The massive coins were issued in denominations of half daler to 10 dalers (the 10-daler pieces weighed 44 pounds each). An assortment of plate money will be on display from the ANA Money Museum.

? The Walton Specimen 1913 Liberty Head 5-cent coin — Five 1913 Liberty Head 5-cent coins were made under mysterious circumstances. The existence of the coins was unknown until 1919, when an advertisement in The Numismatist offered to purchase any example for $500. The ad was placed by Samuel W. Brown, a former Mint employee. In 1920, Brown exhibited all five coins at the ANA convention in Chicago. The Walton specimen is displayed on loan at the ANA Money Museum courtesy of the Walton family.

? The Idler/Bebee Class III Specimen 1804 Dollar — Known as “The King of U.S. Coins,” the 1804 Draped Bust dollar is exceedingly rare, with only 15 known examples. No U.S. dollars dated 1804 actually were struck in that year; Class I examples were struck in 1834 and 1835 as diplomatic gifts (eight known), while Class II (unique) and III dollars (6 known) were struck during the 1850s for collectors. The Idler/Bebee specimen was donated to the ANA by Aubrey and Adeline Bebee in 1991.

? Illustrium Imagines: The World’s First Illustrated, Printed Numismatic Book — Displayed will be a rare, 490-year-old original copy of the first illustrated, printed numismatic book, Illustrium Imagines (Images of the Illustrious). The book was authored by Andrea Fulvio and printed in 1517 in Rome. It contains 204 woodcut illustrations from ancient Roman coins and medallions, and is one of the greatest landmarks in the history of numismatic literature, according to the ANA. The book was donated to the ANA by Dwight Manley in 2007.

? The ANA Bebee Collection of United States Paper Money — The Bebee Collection is among the finest collections of U.S. paper money and includes high-grade notes from virtually every state and territory. A wide range of rare national bank notes will be on display in Pittsburgh. The collection was donated to the ANA by Aubrey and Adeline Bebee in 1987.

The Pittsburgh National Money Show is the ANA’s inaugural fall National Money Show. Show hours are 9:00 a.m. to 5:30 p.m. Oct. 13 to 15. Admission costs $6 for adults, and is free for ANA members and children 12 years and under. All visitors with a valid student I.D. will be admitted free of charge on Saturday, Oct. 15.