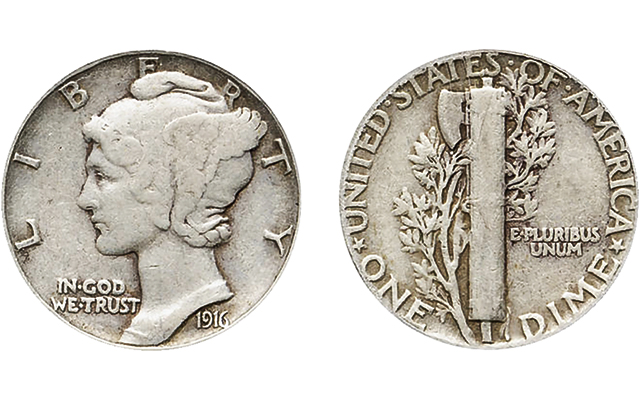 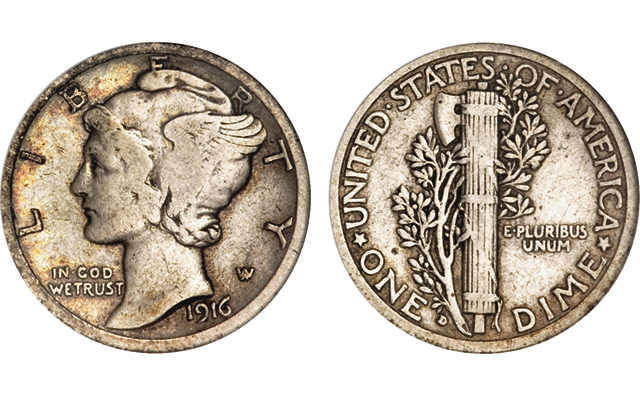 Compare the obverse of the pattern piece with this regular issue 1916-D “Mercury” dime and note the subtle design differences including the positioning of Liberty’s head on the obverse.

A pattern 1916 Winged Liberty Head dime is one of the highlights of Bonhams’ June 2 auction in Los Angeles.

At first glance the design reveals few differences from the circulation strikes. Indeed, it’s this similarity of the pattern piece to regular issue 1916 Winged Liberty Head dimes (or Mercury dimes, as the design is frequently called) that likely allowed this example to circulate for years before being spotted by a sharp-eyed collector.

It is graded Proof 25 by Professional Coin Grading Service and carries a green Certified Acceptance Corp. sticker indicating quality within the grade.

The piece is certified as Proof since patterns of this era were originally struck as Proofs, distinguished from business strikes intended for circulation. A pattern coin might lose its original Proof surfaces, but does not lose its Proof designation even when well-worn, as is the case here.

Bonhams notes, “For future identification, a tiny lateral mark is near the midpoint of Liberty’s neck, a thin vertical scratch is near the top of the torch.”