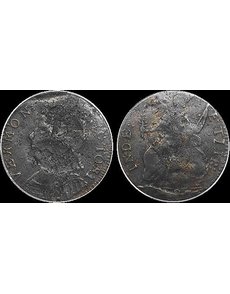 Could a reader’s coin be a rare 1787 Vermont, Bust Left copper? Only an expert in Colonial coins can determine that. Shown is a “Genuine” example of the variety sold by Heritage Auctions Aug. 2 for $11,162.50.

My wife and I have a coin that looks like the Vermont copper shown on the Stack’s Bowers Galleries advertisement in the Sept. 3, 2012, Coin World. We can see the date and a “B.” on the coin’s reverse and the bust on the obverse faces left.

Where do we call or send this coin to get it checked out and how much will it cost to do so?

The coin shown in the advertisement is a 1787 Vermont, Bust Left copper, graded About Good 3 by Professional Coin Grading Service and listed as variety W-2060, RR-15, Bressett 9-I. It realized $8,812 in Stack’s Bowers’ June 2012 Baltimore Auction.

Another example of the 1787 Vermont copper (illustrated above), authenticated as “Genuine” and encapsulated by PCGS but possessing better detail than the Stack’s Bowers piece, sold for $11,162.50 in an Aug. 2 Heritage auction at the ANA World’s Fair of Money in Philadelphia.

With prices like these, it is only natural that the Blakes would wish to have their own potential Vermont copper authenticated.

Before sending their piece to be authenticated by a third-party grading service, however, Mr. and Mrs. Blake should do some research first. This would entail consulting relevant numismatic resources, such as The Whitman Encyclopedia of Colonial and Early American Coins. The Whitman Encyclopedia provides detailed descriptions of the W-2060 variety and lists two other Vermont copper varieties (dated 1786) with left-facing busts (W-2045 and W-2050), ones that are not as rare as the piece sold by Stack’s Bowers.

They may also consider contacting the Colonial Coin Collectors Club (www.colonialcoins.org) or Early American Coppers (www.eacs.org) — organizations with members who may provide useful information and advice.

After that, if it has been determined that the piece has a good chance of being genuine, having it authenticated and graded would be the next step.

For detailed information about the costs involved with having this coin authenticated and graded, as well as the shipping, handling, insurance and any other associated fees, Mr. and Mrs. Blake should contact the third-party grading services directly before submitting the piece.