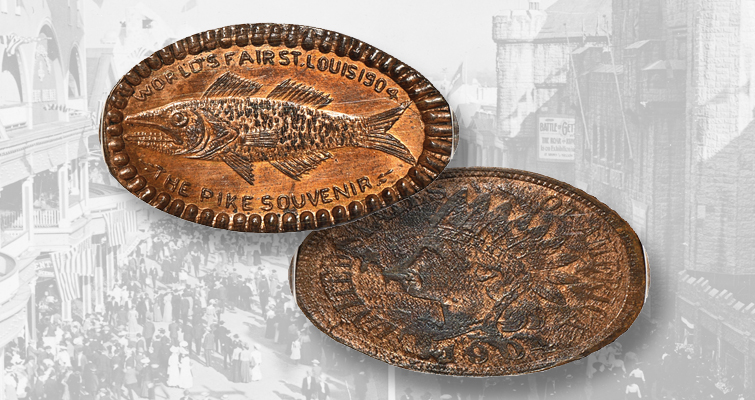 The finest-known “The Pike Souvenir” elongated 1904 Indian Head cent, graded MS-67 red and brown, is a famed souvenir of the 1904 “World’s Fair” in St. Louis. A 1904 image captures the great pike, or midway, at the expo.

Images courtesy of Scotsman Auctions and Library of Congress.

The finest-certified example of “The King of Elongated Coins” will make an appearance on July 23 at Scotsman Coin & Jewelry’s Midwest Summer Sale. The auction will take place at the Saint Charles Convention Center in Saint Charles, Missouri, alongside the Missouri Numismatic Society’s 61st annual convention.

The cataloger notes, “Obviously rolled and then put away into careful storage, the surfaces exhibit substantial mint orange — is that the proper way to describe color after a cent has been elongated? — and the Indian design itself remains plainly discernible on the reverse, itself still showing a lot of orange color.”

The Louisiana Purchase Exposition, today often termed the St. Louis World’s Fair, was an international exposition held in St. Louis from April 30 to Dec. 1, 1904. More than 50 concession-type amusements could be found on “the Pike,” alongside educational and scientific displays and plenty of entertainment options.

Among the novel attractions were machines that could roll elongated cents. Two other elongated cents of the period are included in the lot, which has an estimate of $3,500 to $4,000 and is from the Donald Drew Collection.

Elongated coin specialist and roller Ray Dillard wrote in the June 2002 “First Strike” supplement to the American Numismatic Association’s publication The Numismatist, “ ‘The King of Elongated Coins’ is a fish! It was issued by Charles Damm for humorous reasons,” explaining, “You see, the Midway at the fair was known as the ‘Pike’ (from turnpike); therefore, the depiction of a pickerel (a fish related to the freshwater pike) on this elongated cent was a play on words.”

Dillard concluded, “The detail work on the engraving is typical of Damm’s distinctive style and ability (even the fish scales show). The quantity issued is unknown, but the prices realized are testimony to its rarity.”

Scotsman’s catalogs are characterized by their often frank commentary on the coin market, as seen in the description of a 1921-S Indian Head 5-cent piece graded MS-64 Error, Reverse Lamination by NGC that has an estimate of $2,800 to $3,100.

“Back when ANACS dominated the certification market … such a coin probably would have earned a straight grade and then a ‘lamination’ disclaimer. Today, apparently, it is necessary to reference such an alloy irregularity as ‘mint error,’ which NGC mistakenly relegates only to the reverse.”

The 1921-S Indian Head 5-cent coins are well known for sometimes being struck on improperly prepared planchets that often feature irregularities as seen in the subject coin. But Scotsman also points out, “Unlike the usual example, both sides feature much better strikes than a typical 1921-S, with the bison in particular showing a bold, full horn and substantial detailing within his hide.”

Another interesting commentary is seen on a 1795 Flowing Hair, 3 Leaves silver dollar graded Fine 12 by Professional Coin Grading Service of the B-5, BB-27 variety in the early dollar references.

Scotsman writes, “A case can be made for ‘gradeflation’ when one notices that the included ANACS photo-certificate (dated 11/4/86) grades this same coin VG-8/8,” referencing early third-party grading where often each side would be graded independently.

The cataloger adds about the popular type coin, “Both sides exhibit rather decent, if slightly steely greyish patina contrasting well with darker recesses to produce a strong, bold appearance,” while, “two or three tiny old nicks on the cheek join a couple additional, smaller central abrasions on the reverse to account for every mentionable distraction.” It has an estimate of $2,800 to $3,400. 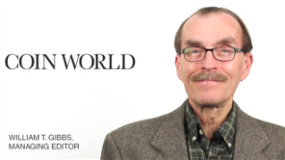 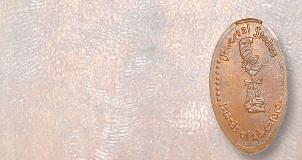 How did an elongated coin make it into a bank roll? 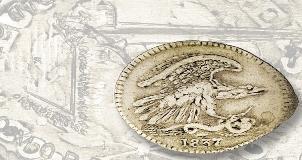