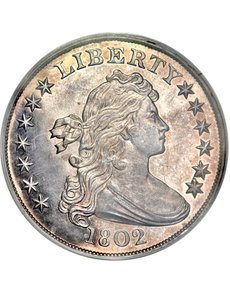 Two unusual and extremely rare Philadelphia Mint proof coins — an 1802-dated "novodel" silver dollar and a 1907 Ultra High Relief, Sans Serif Edge Saint-Gaudens double eagle – are among the highlights of the Heritage Auctions Philadelphia Signature U.S. Coin auction featuring Platinum Night™, scheduled for Aug. 2-5. The Heritage Platinum Night session includes some of the most exclusive rarities in U.S. coinage, including some offered for the first time in years.

Only four proof 1802 Draped Bust dollars, or "novodels," are known, making them far rarer than the famous 1804 dollars. The example of this enigmatic issue in this auction, graded PR65 Cameo PCGS, CAC, is arguably the highest-quality and most famous of all. While the four 1802 novodels have been given identical technical grades by the major certification services, Heritage considers this specimen the finest by a slim margin, which is corroborated by a published condition census.

Atop the regular-issue highlights is a 1921 double eagle graded MS65 PCGS, CAC, a famous melt rarity. Though more than half a million 1921 double eagles were struck, only a few left government possession and all the rest were destroyed during Franklin Delano Roosevelt's presidency. Only four examples have been graded as MS65 or better by a major grading service, adding condition rarity to this coin's desirability.

Not a coin itself but inextricably related to them, the "Genesis Letter," a typed letter signed by President Theodore Roosevelt and sent to Secretary of the Treasury Leslie M. Shaw, signals President Roosevelt's private interest in coinage redesign and names Augustus Saint-Gaudens, who went on to make the eagle and double eagle designs bearing his name. The letter, dated December 27, 1904, is a singular piece of numismatic history.

Bidding on this auction will continue through August 5, with Platinum Night scheduled for Friday, August 3. If you can't make it to the auction, you can place your bids at HA.com/Coins, or live against the auction floor through Heritage Live!™