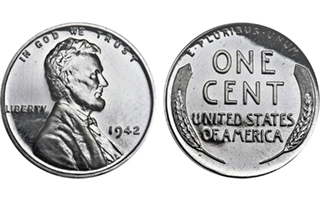 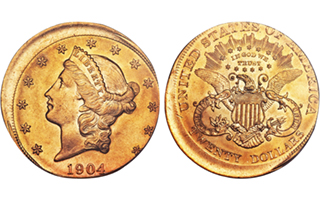 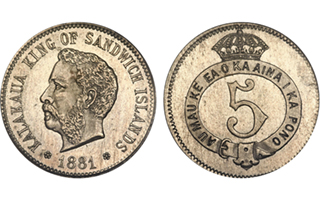 Pattern 1881 Hawaiian 5-cent coin pattern references King Kalakaua as KALAKAUA KING OF SANDWICH ISLANDS instead of KALAKAUA I KING OF HAWAII as the legend appears on the 1883 coinage.

The only currently known 1942 Lincoln cent pattern struck in aluminum, with a plain edge, is one of the 483 lots to be offered during Heritage Auctions’ April 24 Platinum Night in Schaumburg, Ill.

The cent is graded Proof 66 by Professional Coin Grading Service.

The pattern cents of 1942 are split into two groups — those modeled after the Colombian 2-centavo coin, and those bearing the regular Lincoln cent designs.

While the 10th edition of United States Pattern Coins, Experimental & Trial Pieces by J. Hewitt Judd, edited by Q. David Bowers, suggests additional metallic compositions for the 1942 cent patterns may have been struck with the regular issue dies, currently known examples are only those struck in aluminum, zinc-coated steel and white metal.

The Heritage auction, including Platinum Night, will be offered April 23 to 26 in conjunction with the Central States Numismatic Society 75th Anniversary Convention at the Renaissance Schaumburg Convention Center.

PCGS had the unique Judd 2079 1942 pattern cent metallurgically analyzed several years ago after it was pulled from a Heritage March 2008 sale where auction materials originally described it as being white metal. The pattern cent was withdrawn in response to questions raised about the composition. The coin was resubmitted to PCGS for the analysis.

The pattern cent’s weight is 1.563 grams, approximately half the normal 3.11 grams for a regular issue 1942 Lincoln cent.

According to Heritage’s lot description for the April 24 auction, numismatist Roger Burdette, in his book on 1942 experimental coinage, hypothesized:

“The assay: Al 98; Si 0.7; Fe 0.6; Ag 0.5 and Mg 0.4 is very significant. Although most of the piece is aluminum, the other elements are not impurities. Someone was making a deliberate attempt to test a harder, more durable alloy than plain aluminum.

“Aluminum-silver alloys can be extremely hard [although they are also extremely difficult to produce and usually require an atmosphere free of oxygen] and the quantity of silver necessary is small. The U.S. Mint experimented with them as far back as the early 1860s, and [U.S. Mint Director] James Ross Snowden conducted other experiments in about 1885.”

Mike Byers from Mike Byers Inc., Las Vegas, Nev., said he purchased the coin for $145,000 from Weinberg several years ago. Byers consigned the error to the sale.

The double eagle is struck 15 percent off-center toward the 5 o’clock position and is “the farthest off-center error known for a United States gold coin,” according to Byers.

On the obverse, the off-center strike affects the dentils on the rim as well as the outer points of stars 12 and 13 on the right side of the coin. The dentiled rim on the reverse is also affected, along with the top of the second S in STATES.

The sale’s 1881 Hawaiian 5-cent pattern grades PCGS MS-64. Cataloged as Medcalf 2CN-1 by Donald Medcalf and Ronald Russell in Hawaiian Money: Standard Catalog, it bears on its obverse a bust left of King Kalakaua, similar to the bust right seen on the regular issue coins dated 1883.

The obverse of the 1881 pattern contains an error, referencing Kalakaua as KALAKAU KING OF SANDWICH ISLANDS instead of KALAKAU I KING OF HAWAII as the legend appears on the 1883 coinage.

Sandwich Islands was the European name for Hawaii. The inscription HAWAII appeared on the 1847 Hawaiian cent and the 1883 coins.

The reverse motto referencing the Kingdom was also incorrect, with state motto appearing as AU MAU KE EA O KA AINA I KA PONO instead of starting with UA.

According to Medcalf and Russell, King Kalakaua embarked on a trip around the globe. During Kalakaua’s travels, the owner of a nickel mine in New Caledonia contacted him, offering to strike nickel coins for the Kingdom of Hawaii.

In total, 200 5-cent coin patterns were struck in nickel in Paris, and shipped to Kalakaua after his return home. No Proof versions were ever struck and the designs were never adopted.