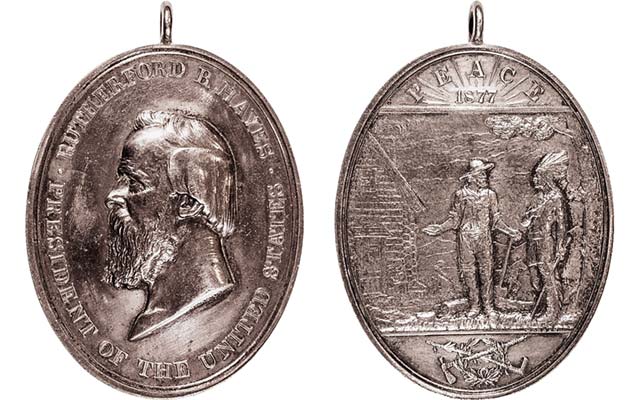 Unique "1877" type Rutherford B. Hayes oval silver Indian Peace medal is reported to have been presented by the U.S. Mint to Hayes' wife, Lucy.

An 1877-dated silver oval Rutherford B. Hayes Indian Peace medal purported to have been presented by the U.S. Mint to Hayes' wife, Lucy, is offered in Early American's April 25 online sale.

The medal, attributed as Julian IP-43 (as detailed by R.W. Julian in Medals of the United States Mint: The First Century 1792-1892), was designed and engraved by U.S. Mint assistant engraver George T. Morgan. Numismatic Guaranty Corp. certified and encapsulated the 60-millimeter by 76-millimeter medal as "Genuine." Early American describes the medal's condition as "Very Choice About Uncirculated."

The auction lot description suggests the medal may be the example presented to Mrs. Hayes in May 1879 by the Mint. The medal is identified as the only example known of the type, bearing the date 1877 below the inscription PEACE at the top of the reverse.