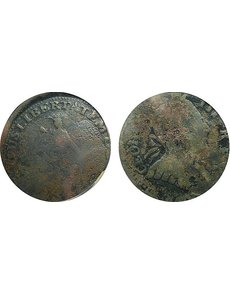 A rare no-date (1787) New York copper, featuring King George III on one side and an American Indian on the other, has resurfaced in New Hampshire. To date, only three pieces of this type are known. 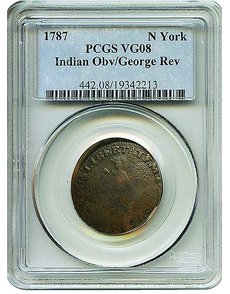 Shown is the Indian/George III copper as it appears in its Professional Coin Grading Service encapsulation. PCGS graded the piece Very Good 8.

A rare post-Colonial copper has resurfaced in New Hampshire.

Listed in A Guide Book of United States Coins (frequently called the “Red Book”) under “Post-Colonial Issues,” the no-date (1787) New York state copper features an American Indian on its obverse and King George III of Great Britain on its reverse. The Red Book states only three pieces are known and provides no pricing.

The copper coin is of a type minted by Machin’s Mills and listed in Walter Breen’s Complete Encyclopedia of U.S. and Colonial Coins, where it is classified as Breen 1001.

Joseph Presti, a numismatist with Rare Coins of New Hampshire, relayed information of the rediscovery of the coin to Coin World.

Presti submitted the piece for grading and authentication to Professional Coin Grading Service on behalf of the coin’s owner, who wishes to remain anonymous.

As Presti relayed the story to Coin World, the current owner of the New York, Indian/George III copper coin said that the piece was found in the 1950s, behind the riser of a set of stairs in a house his father-in-law was remodeling.

The coin remained in the possession of the father-in-law until it was given to the current owner about 1970. Sometime during that decade, the owner sent it to be examined by an expert on the West Coast, but the identity of this initial examiner has been forgotten.

The copper had been in storage since its return from that examination until it was taken to Rare Coins of New Hampshire, where Presti urged the owner to have it authenticated and graded by Professional Coin Grading Service.

During the authentication process, the copper was examined by Anthony Terranova, an early American coin specialist and New York coin dealer who had previously handled the other two known examples. Terranova confirmed his examination of the piece in a phone conversation with Coin World.

The coin was returned by PCGS to Rare Coins of New Hampshire, encapsulated and bearing a grade of Very Good 8.

When asked if the owner had given any indication if he plans to sell the piece, Presti responded that the owner of the copper is “currently exploring various options.”

A Guide Book of United States Coins originally stated there were “two known” pieces. This was changed to “three known” beginning with the 33rd edition.

In addition to its full-color portrayal in the Guide Book, this particular copper can also be seen in the Whitman Encyclopedia of Colonial and Early American Coins, published in 2009.

The other piece, described as Very Good 8 and authenticated by ANACS, sold for $4,100 in the Devonshire sale, conducted by New England Rare Coin Auctions Nov. 14, 1977 (Session 1, Lot 2). The catalog for the auction provides only a small black and white image of the piece.

The 1977 New England Rare Coin Auctions catalog states, “This is a third, a recent discovery piece, nearly equal in condition to the [Red Book] plate coin.”

This description appears to signify that the PCGS VG-8 example resurfacing in New Hampshire and found in the 1950s was already a known example by this time, and further signifies that the VG-8 copper first sold by New England Rare Coin Auctions in 1977 was the piece that prompted the Guide Book to change the listing’s description from “two known” to “three known.”

However, some discrepancies appear in the coins’ pedigrees.

According to Breen’s Encyclopedia, published in 1988, the first example he lists, with no grade given, was owned by, chronologically, “[Joseph J.] Mickley, [Charles I.] Bushnell, [Lorin G.] Parmelee, [private collector, Ill.], [Eric P.] Newman,” and was depicted in A Guide Book of United States Coins.

Then, Breen lists the EF example sold in the Garrett auction as having a pedigree of John G. Mills, George Bascom, Waldo Newcomer and John Work Garrett. This he lists as a separate piece from the first example. However, the Garrett piece (sold in 1979) is the piece pictured in the Guide Book.

The description in the Bowers & Ruddy catalog for the Garrett auction states that the EF piece is “From the Mills Collection; earlier from the collections of Lorin G. Parmalee, Charles I. Bushnell, and J.J. Mickley. A stellar pedigree which includes some of our most prominent early numismatists.” Thus, in the Bowers & Ruddy description, there is a mixture of Breen’s pedigree for piece number one (Mickley, Bushnell, Parmalee) with piece number two (Mills, Garrett).

If the Bowers & Ruddy description is correct, Breen’s first two examples are actually one and the same.

As the third piece, Breen lists the “Devonshire” copper, originally sold in the New England Rare Coin Auctions 1977 sale and subsequently sold by Stack’s in 1983.

Coin World could not determine the identities of the current possessors of the pieces purchased at auction in 1979 and 1983.

The New York, Indian/George III copper was struck during the Post-Colonial/Confederation era before the ratification of the U.S. Constitution, at a time when each state had authority to issue its own coins and paper money.

United States coinage was not officially minted by the federal government until 1793, following the establishment of the federal Mint in Philadelphia in 1792.

Manufacture of the New York, Indian/George III copper is attributed to Machin’s Mills, a coining enterprise run by Thomas Machin and partners, which minted copper coinage for a number of states, including Connecticut and New York, plus the independent republic of Vermont. Machin’s Mills is also responsible for many imitation (or “counterfeit”) English halfpence.

The Indian side of the copper — sometimes classified as the obverse, sometimes as the reverse — depicts a crude rendering of an American Indian, tomahawk in one hand and bow in the other. This motif is also seen on some Nova Eborac and Excelsior coinages of New York.

The Latin legend on this side of the piece reads liber natus libertatem defendo (roughly translating to “Born free, I defend freedom”).

The other side of the copper features a bust of America’s former monarch, facing right. The Latin legend reads (with the letter c twice replacing the letter g) ceorcivs iii rex, or “George III, King.”

On this most recently authenticated example, portions of the legends are cut off. The Whitman Encyclopedia of Colonial and Early American Coins explains: “This variety is always found unevenly struck. As obverse 9 developed a cud break the coiners misaligned the dies so that the cud area would not strike up, thus getting more life out of the die.” ¦