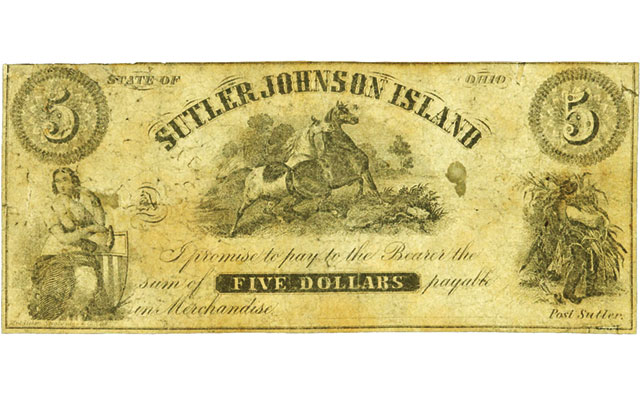 This Civil War-era sutler's token was used by prisoners in the federal prisoner of war camp on Johnson Island, Ohio, in Lake Erie. It sold for $3,818.75 at auction.

Sutlers were officially sanctioned merchants who followed the troops to sell them various goods.

This sutler note was for use during the Civil War at the Union prisoner of war camp on Johnson Island, located in Sandusky Bay, Lake Erie. The piece is not dated.

The catalog described the piece as one of the most important sutler issues, North or South, as this was a POW camp used mainly for Confederate officers. “Conditions here, excepting the Lake Erie winter weather, were better than most POW camps in the war. Over the course of this Sandusky Bay island’s prison life, some 10,000 men passed through,” according to the catalog.

The 50-cent piece, graded Fine by the auction firm, was issued for the Stonewall Brigade of the Army of Northern Virginia, March 9, 1863.

“The brigade was named in [Gen. Thomas ‘Stonewall’] Jackson’s honor in 1863 after he was mortally wounded at Chancellorsville.” Men in the brigade were from the “2nd, 4th, 5th, 27th, and 33rd Virginia regiments that had formed up earlier in the war. The nickname given to the brigade was exclusive and official,” according to the catalog description.