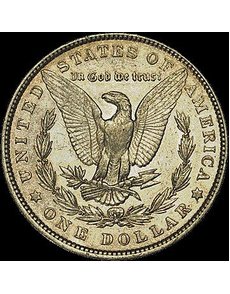 The author won this Shifted Eagle variety of the 1901 Morgan silver dollar with a bid of $240 in a 2012 online auction.

One of the rarest Morgan silver dollar varieties is the 1901 Doubled Die Reverse, also known as the VAM-3 Shifted Eagle.

VAM is an acronym for Leroy Van Allen and A. George Mallis, numismatic authors who wrote the Comprehensive Catalog and Encyclopedia of Morgan and Peace Dollars.

The VAM book describes this variety as “the strongest doubled reverse die of the Morgan series.”

Home hobbyists love the Shifted Eagle variety because you can still find it unattributed in online auctions, antique malls and even coin shops.

The variety occurred because of a misalignment of the hub and die so that the eagle was shifted slightly, doubling the lower eagle wings, tail feathers, arrow shafts and arrowheads (along with other devices).

I especially like the doubling of the tail feathers because they are as pronounced as those found on strong varieties of the 1878 Morgan, 7 Over 8 Tail Feathers dollar.

Others may disagree, but I think the 1901 Morgan, Shifted Eagle dollar is as alluring as the 1955 Lincoln, Doubled Die Obverse cent.

Like the 1955 Lincoln, DDO cent, the Shifted Eagle’s doubling is so strong that it can easily be seen without magnification. Just as the 1955 DDO is needed to complete a set of Lincoln cents, the 1901 variety is a must-have to complete a Morgan set.

Unlike the 1955 cent, however, the 1901 Morgan dollar is rare in Mint State. That gives it added appeal, assuming you can find one.

The value of a 1955 DDO cent in Extremely Fine condition is about $2,200, about the same as recent auction prices for the Shifted Eagle.

Values of the Morgan variety can rise dramatically to $10,000-plus in low Mint State.

Here’s the thing, though: How likely would you be able to win a properly cataloged 1955 Lincoln, DDO cent with a modest bid in an auction? Not likely.

But with the Shifted Eagle, you can do just that.

It’s tucked away safely in my bank box where I visit it regularly.

I also placed it in my PCGS Set Registry where I can view it online anytime.

This type of find is not based on luck. It’s based on numismatic knowledge that you can gain at home reading Coin World.

It also requires immersing yourself in the hobby to the extent that you know a good bargain when you see one, literally.