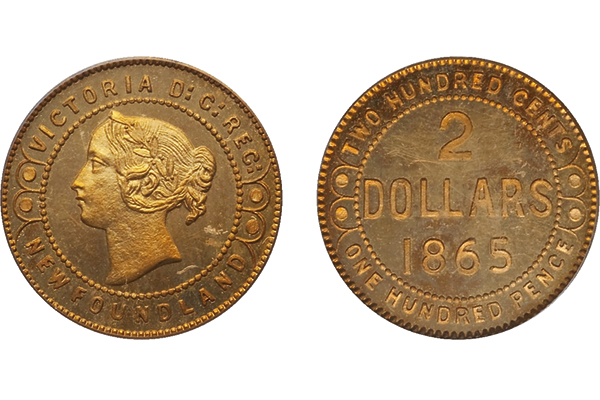 A pattern 1865 gold $2 of Newfoundland is apparently unique in private hands and one of two examples known. It realized $102,812.50 during a Heritage Auction sale April 10.

A rare gold $2 coin pattern for Newfoundland, issued when the province used its own coins, realized $102,812.50 in an April 10 Heritage Auctions sale.

The auction was conducted April 10 to 12 during the Chicago International Coin Fair.

The coin was struck at the London Mint for Newfoundland, which eventually issued a very similar but distinctly different design for the gold $2 coin.

Experts suggest this piece is one of two examples known, the other residing in the British Museum collection. In 1969 Canadian numismatic researcher Fred Bowman listed this pattern among the 10 rarest Canadian coins, citing the 1910 appearance of the coin in a Spink Numismatic Circular. According to Heritage, that 1910 example is likely the one just sold.

The example Heritage sold was once part of the King Farouk Collection, which was sold in 1954. Later, it joined the cabinet of Emory May Norweb, where it was held until the sale of the Canadian portion of the collection by Bowers and Merena in 1996. In that auction, the 1865 pattern realized $39,600.

The example just sold was most recently part of the Prager Collection of Canadian Specimen Coins, one of the highlighted collections in the Heritage auction.

No other privately owned example has been confirmed in the last 100-plus years, according to Heritage.

A Heritage official had not responded at publication time to questions about the winning bidder.

Graded Specimen 63, the current example has a plain edge and is struck in coin alignment, meaning the obverse and reverse are positioned “upside-down” compared to each other when the coin is turned along a vertical axis.

Among the major differences in the design between the adopted coin and the pattern is the treatment of the obverse legends. Segmented by a beaded border, the obverse legends on the pattern are rendered much like the reverse of both this pattern and the circulating coinage, in having numerous ornamental arches at 3 o’clock and 9 o'clock to break the lettering. The adopted design lacks the arches on the obverse, but retains them on the reverse.

In addition, the font is bold and distinctly blocked, unlike the font used on the circulating type, which softened the look by adding serifs. The date is also used in a larger font that serves to occupy a larger portion of the reverse fields of the pattern.

According to Heritage, the pattern was produced with proof-like qualities, while the fields show considerable mirrors and the devices hold cameo-producing frost. Both sides of the coin feature an orange tone.