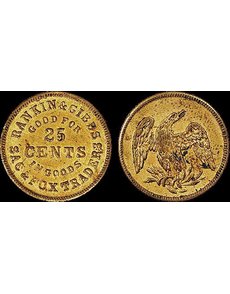 Indian traders John Knox Rankin and Hiram Gibbs circulated store cards to facilitate change-making at their agency in the Sac and Fox tribal lands in what has become Oklahoma. The example shown is listed as SNL-5a in George and Melvin Fuld’s U.S. Civil War Store Cards, revised.

Rankin was born in Indiana in 1837, the son of a Presbyterian minister. Rankin was brought up in a strict abolitionist creed. In 1859, as a college-educated young man, he joined the exodus to “Bleeding Kansas” to ensure the territory was admitted as a free state.

Rankin came to Lawrence, Kan., headquarters of the Free State movement. He became doorkeeper for the territorial legislature.

Several months later, he joined the Second Kansas Infantry, and remained with the unit when it was reconstituted a cavalry outfit. In 1863 Rankin survived the burning of Lawrence by William Quantrill, and later served in the Army of the Cumberland.

Following the war, Rankin was appointed paymaster and inspector general of the Kansas militia, with rank of colonel. He was also elected a state legislator and mayor of Lawrence, and appointed the town’s postmaster to boot!

Rankin was engaged in various commercial pursuits. By September 1867 he opened a store, J.K. Rankin & Co., at Quenemo in the Sac and Fox Agency in Kansas’ Osage County, southwest of Lawrence.

In September-October 1867, the United States signed a treaty with the Sacs and Foxes providing they should be relocated to a new reservation in Indian Territory (present day central Oklahoma). Rankin was a witness and signatory to the treaty. He was also permitted to purchase up to eight acres on which his buildings were located.

Licensed traders were appointed to conduct trade with the Native Americans on the reservations in Indian Territory.

The natives removed to Oklahoma late in 1869, and the Sac and Fox Agency there dated to 1870.

The new agency consisted of a mission school and Indian agent Thomas Miller’s residence. Rankin and Gibbs got the new concession there. In 1875 and 1876, they were also given permission to transact business with the Kickapoos at Shawneetown and Kickapoo Springs.

In May 1876, the trader’s store was robbed “by three armed desperadoes.” Circa 1878, Rankin and Gibbs filed for bankruptcy. Gibbs reconnected with Whistler, Pickett and Co., and continued as trader at the Sac and Fox Agency through at least 1885. In 1890 Rankin, was appointed special disbursing agent to various Indian tribes in the Southwest.