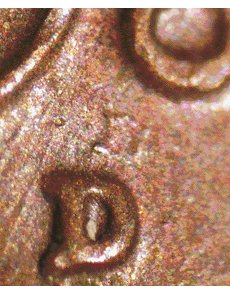 The lower loop of a purported “S” Mint mark is located just above the normal Mint mark on this 1980-D Lincoln cent. It turned out to be a die dent. 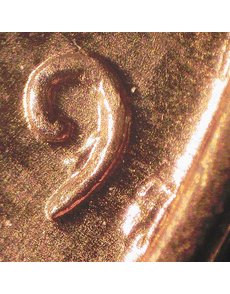 The raised blemish tucked into the tail of the last 9 of this 1959-D Lincoln cent is interpreted by some as a misplaced “D” Mint mark. A simpler and more prosaic explanation tags it as die damage similar to that found just inside the rim. 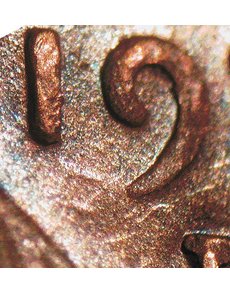 A suspected “S” Mint mark can be seen beneath the 1 and the 9 in this 1956-D Lincoln cent. Skeptics think it is merely a simulacrum. 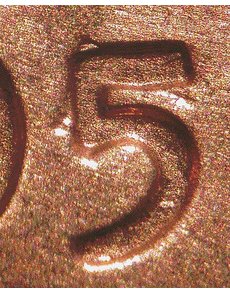 The angular shape protruding above and behind the 5 in this 1956-D Lincoln cent has been interpreted by some as the top of a second 5.

A random or accidental pattern that is misinterpreted as a meaningful pattern is known as a simulacrum. Seeing an image of the Virgin Mary in a scorched tortilla would be one example, or a demon’s head in the hair of Queen Elizabeth II, as occurred on some 1954 Canadian notes.

Seeing a letter or number where none exists is another form of a simulacrum.

Being fooled by letter and number simulacra is an occupational hazard for die variety collectors. These dedicated coin-hunters doggedly look for the slightest die imperfection as thousands of coins pass beneath their loupes and microscopes. Much of their effort is directed at finding familiar types of die varieties such as repunched Mint marks, misplaced Mint marks, over Mint marks, dual Mint marks and repunched dates.

False positives are inevitable since die imperfections often develop as the result of normal wear and tear. Once in a while, a spot of die damage — a die dent, die gouge or impact scar — will be mistaken for a letter or a number. Likewise, a patch of die erosion will produce a raised “bleb” on the surface of a coin that can look like a letter or numeral.

Our first photo shows a formerly well-accepted dual Mint mark variety. It is a 1980-D Lincoln cent with what was once considered to be the lower loop of an “S” Mint mark between the date and the normal “D” Mint mark. Early die state examples eventually turned up that conclusively showed that the alleged “S” Mint mark was nothing more than a small, irregular die dent. Subsequent die wear smoothed out the irregularities, leaving an S-shape.

A well-known, but highly dubious misplaced Mint mark variety is seen in the accompanying 1959-D Lincoln cent image. What appears to be the back of an accessory “D” Mint mark is seen peeking around the tail of the second 9. Some see it as having been punched in upside-down. Inverted or not, its status as a letter can be disputed on several grounds. The purported D Mint mark is thicker and more irregular than most genuine errant Mint marks. More tellingly, a rather similar looking spot of irregular die damage is lying very close by, just inside the design rim. Despite these problems, it is still listed as a legitimate (or at least potential) die variety by many authorities.

Two controversial dual Mint mark varieties (D and S) are listed among 1956-D Lincoln cents — a year after the San Francisco Mint stopped producing cents for general circulation (production would resume in the years 1968 to 1974). The better-known variety is shown here. It features a faint, incomplete S-shape beneath and between the 1 and the 9. The upper, middle and lower segments of a suspected S Mint mark can be identified, but they are not connected to each other, even in early die state coins.

While most classification systems list this as a genuine dual Mint mark variety, Combined Organizations of Numismatic Error Collectors of America attributer James Wiles is skeptical. He sees the “upper loop” of the S as being nothing more than the convergence of two die scratches. The rest of his rebuttal can be found on the Variety Vista website: news.conecaonline.org/Variety%20Master%20Listings/lincoln%20rpms%201956-1957.htm.

The second claimed dual Mint mark variety from this year shows an S-shaped elevation just to the right of the normal D Mint mark. This S is complete, but it only makes a full appearance in later die states, leading some to suspect it is merely an odd pattern of die flow lines.

Repunched dates were supposed to have ended in 1908. Up to that time the digits (the last two, at any rate) were punched into each working die by hand. After that date, the digits were part of the master hub or were punched in or engraved into the master die. And yet two alleged repunched date varieties have been identified among cents produced decades later. One consists of a 1956-D cent with an alleged repunched 5.

What looks like the upper portion of a second 5 can be seen protruding from the top of the horizontal bar and from the back of the vertical bar. Defenders of its status as a repunched date variety speculate that this was originally a fouled-up master die that was recommissioned as a working die.

I’m skeptical. Not only is a repunched date highly unlikely in this time period, the letter trace doesn’t look convincing. The horizontal bar is unaccountably thin, while the vertical bar flares slightly at its base and has an odd crease in it.

The other purported Lincoln cent with repunched date is found in a 1957-D cent with a suspected repunched 7. The supposed extra 7 manifests itself as a squared-off elevation that protrudes from the tip of the normal 7. Such a tiny imperfection could be almost anything.