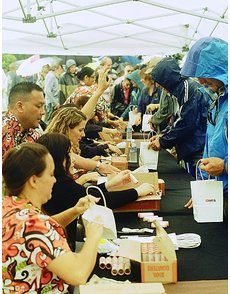 Employees of HFC Credit Union staff eight stations under a protective awning in the exchange area, at face value, of cash for $10 rolls of the just-released 2012 Hawai‘i Volcanoes National Park quarter dollar on Aug. 29. 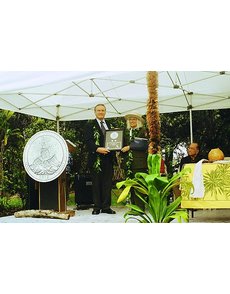 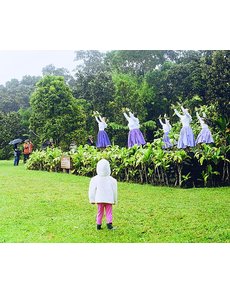 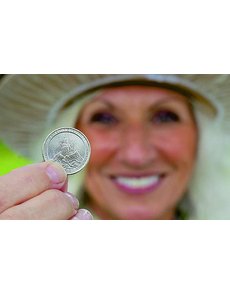 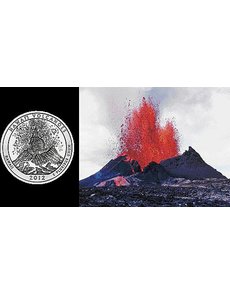 A 1983 photo shows the Pu‘u O‘o cinder cone erupting at dusk. This photograph is believed to be the basis for the reverse design of the Hawai‘i Volcanoes National Park quarter dollar, left.

In a fitting tribute to the rollout of the latest coin in the America the Beautiful Quarter series, a gentle rain fell steadily as a hula troupe performed three ancient kahiko dances that date to before Western contact, on Aug. 29 in Volcano, Hawaii.

Inouye’s invoking the Hawaiian pantheon of gods and goddesses, with nary a mention of any other religion, hewed closely to the traditions of a land and its indigenous people that existed long before Capt. James Cook’s arrival on Jan. 18, 1778.

“This is a great achievement,” Sen. Inouye said. Now in his ninth six-year term as a U.S. senator, Inouye is the most senior senator in Congress and president pro tempore.

“This was where Hawaii was born,” Inouye said. “Pele was our mother.”

Pele is the Hawaiian goddess of volcanoes. Hawaiian cultural practitioners are permitted to conduct religious ceremonies in the park and leave offerings to Pele and other Hawaiian gods. No others are permitted this activity. The park surrounds the active Kilauea volcano, and extends to the 13,600-foot summit of the massive Mauna Loa volcano. The summit of Kilauea is at a 4,000-foot altitude.

The park’s Kilauea volcano has been erupting since 1983, one of the world’s longest eruptive phases of any volcano.

Experienced volcano watchers have noted that the design compresses inward the sides of the cinder cone as it actually appears in numerous photographs taken in the 1980s. However, the design’s use of various sizes of blobs and dots to represent flying lava corresponds closely to photographs of the flight of lava bombs in an actual eruption event.

Reverse inscriptions are HAWAI’I VOLCANOES, HAWAII (the latter without the diacritical okina), 2012 and E PLURIBUS UNUM.

The coin’s obverse features the 80-year-old design of John Flanagan’s portrait of George Washington. The U.S. Mint states in its official press kit that the design has been “restored to bring out subtle details and the beauty of the original model,” a tacit admission that the “spaghetti hair” design used in Washington’s portrait in recent years is not widely admired by collectors.

Obverse inscriptions are UNITED STATES OF AMERICA, LIBERTY, IN GOD WE TRUST and QUARTER DOLLAR.

The Denver and Philadelphia Mints were scheduled to each strike an estimated 34 million circulating 2012 Hawai‘i Volcanoes National Park 25-cent coins.

Lining up for quarters

After the ceremonies, virtually everyone in attendance lined up to exchange cash for $10 rolls of 2012 Hawai‘i Volcanoes National Park Quarters. The constant rainfall did not dampen enthusiasm for the new coins, several people told Coin World.

Volcano Village resident Colleen Aviles purchased five rolls with her grandchildren Maddix and Lindsey Heller. Lindsey is a preschooler; Maddix is a kindergarten student. “I got him out of school so he could attend,” she said. Aviles has been collecting State quarter dollars and assembling maps with one coin for each state for her grandchildren.

It is a tradition she said she plans to continue with the “America the Beautiful Quarters Program.”

HSF Credit Union employees staffed eight work stations at the exchange program, which took less than an hour to complete. People initially were limited to 10 rolls each. But several people went through the line several times; and some had assistants also going through the line.

After everyone in the line had gone through once, dealers began buying rolls in bulk.

Close inspection by the author of a random sample of 440 of the 2012 Hawai‘i Volcanoes National Park quarter dollars revealed a range of strikes from mirrored Prooflike surfaces on both the obverse and reverse, to several weakly struck obverses showing excessive weakness on the inscriptions surrounding George Washington’s portrait, to a surprising number (32 coins) showing what appears to be clash marks from clashed dies. On these latter strikes, the obverse portrait of Washington bears “flame-like” rough patches on his neck that match elements in the lava fountain on the coin’s reverse.

This observation squares with dealer Dan Tegtmeyer’s experience. Tegtmeyer said he’s attended every ceremony of the 14 “America the Beautiful Quarters” released to date. None of the release 25-cent coins were of high quality, Mint State 65 or above, he said. Tegtmeyer bought 60 rolls of Hawai‘i Volcanoes National Park 25-cent coins.

“I bought my coins for when friends come over and for Christmas cards,” he said. “They’re an inexpensive way to share Hawai‘i.” ¦