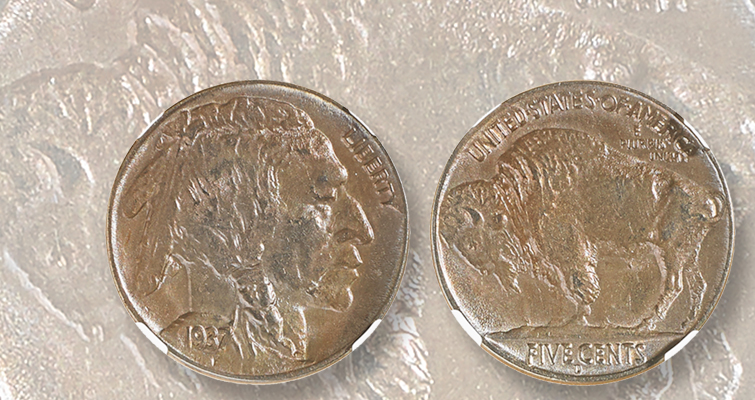 An AU-55 1937-D Indian Head 5-cent piece with the coveted “Three-Legged Bison” on the reverse sold for $1,200 at Rago’s June 9 Coins and Collectibles auction.

The more than a dozen relatively small, specialized firms that had sales in June included Rago Auctions in New Jersey, with offerings spanning a variety of interests and prices.

A common element uniting several of the sales was sculptor James Earle Fraser (1875 to 1953), designer of the Indian Head 5-cent piece in 1913, who also created many other beautiful objects including a medal honoring Theodore Roosevelt and a plaster for an unused but attractive cent design, both also found in the June auctions.

Leading Rago’s June 9 Coins and Collectibles auction in New Jersey was a handwritten letter dated Dec. 16, 1793, signed by Treasurer Alexander Hamilton in his capacity as “The President and Director of the Bank of the U.S.” that brought $31,250. Rago’s numismatic director Chris Wise said that the letter, from an anonymous consignor, had heavy interest and surpassed its estimate of $7,000 to $9,000.

The reverse die was polished overzealously at the U.S. Mint, and this polishing removed the front leg of the bison on the reverse (although the hoof remained.) The popular variety is widely collected by series specialists and nonspecialists alike.