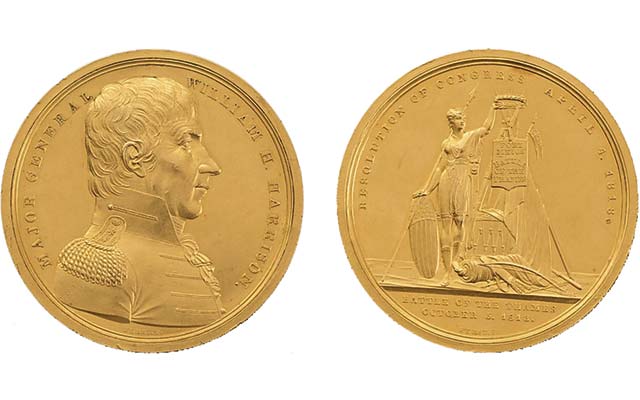 Future President William Henry Harrison was presented this congressional gold medal in recognition of his military leadership during the War of 1812.

Images courtesy of the Raab Collection. 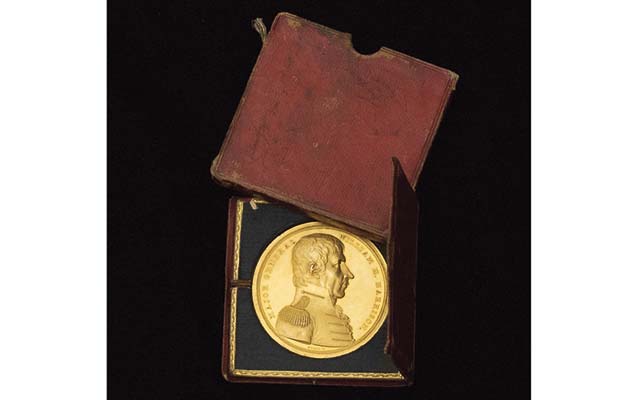 The Harrison medal is shown housed in its original presentation case in which it had been kept in the family for more than 190 years.

Image courtesy of the Raab Collection.

The congressional gold medal presented to future President William Henry Harrison for his military leadership at the Battle of the Thames during the War of 1812 is being offered for sale by the Raab Collection from Philadelphia.

The asking price for the medal is $225,000, according to Nathan Raab, president of the Raab Collection.

Harrison’s descendants, in whose possession the 65-millimeter medal has been passed down over the past 192 years, recently sold the medal directly to the Raab Collection. Raab said he did not know why the heirs decided to relinquish possession of the medal.

Maj. Gen. Harrison was formally presented the medal by the fifth president of the United States, James Madison.

Harrison would eventually be elected as the nation’s ninth president, but only served one month in office in 1841. Harrison died of pneumonia April 4, 1841, following an illness worsened by his March 4 delivery of a 105-minute long inaugural address.

The Harrison gold medal was congressionally authorized on April 4, 1818.

Harrison’s medal was authorized under the same statute as that authorizing a congressional gold medal for Gov. Isaac Shelby.

While governor of the state of Kentucky, Shelby personally led the Kentucky militia in the Battle of the Thames.

According to the U.S. Senate website, the Harrison and Shelby medals were authorized “in recognition of the ‘gallantry and good behavior’ of Major General William Henry Harrison and Governor Isaac Shelby, and the officers and men under their command, ‘in defeating the combined British and Indian forces under Major General Proctor, on the Thames, in Upper Canada, on October 5, 1813, and in capturing the British Army with their baggage, camp equipage and artillery.’ ”

The obverse of the Harrison gold medal features a portrait, facing right, of Harrison in his military garb. The obverse was designed and engraved by U.S. Mint engraver Moritz Furst.

The reverse was engraved by Furst based on a design by American portrait painter Thomas Sully. The reverse depicts a rendition of America crowning British and Indian arms with a wreath. The tablet on the arms reads FORT MEIGS BATTLE OF THE THAMES.

BATTLE OF THE THAMES OCTOBER 5, 1813 is inscribed in the exergue.

According to R.W. Julian in Medals of the United States Mint: The First Century 1792-1892 where the medal is cataloged as MI-14, Furst had executed the Harrison medal’s obverse by October 1821, but the reverse was delayed by a dispute over the design.

Harrison insisted, unsuccessfully, that the reverse depict a battle scene as did the medals awarded other gold medal recipients for their service during the War of 1812

U.S. Circuit Court Judge Francis Hopkinson, one of the signers of the Declaration of Independence, oversaw the design process for the Harrison medal.

The Harrison medal was finally struck in May 1824, according to Julian.

Duplicate medals were also struck in bronze, examples of which have sold at auction in recent years for less than $1,000 certified in as high as Mint State 64 condition.

“The Harrison obverse die, if not the reverse, lasted until at least the 1880s,” Julian writes.