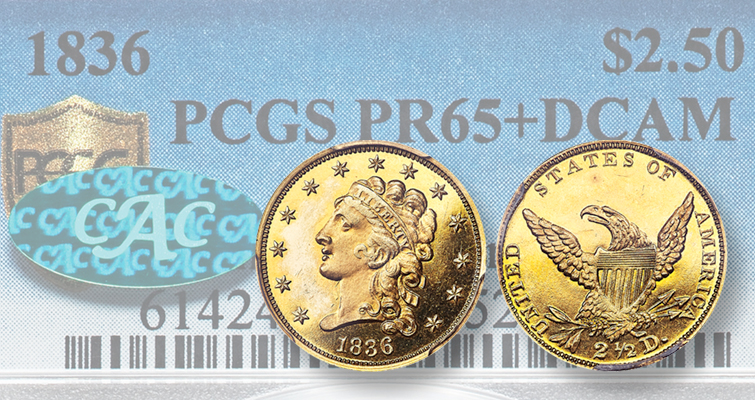 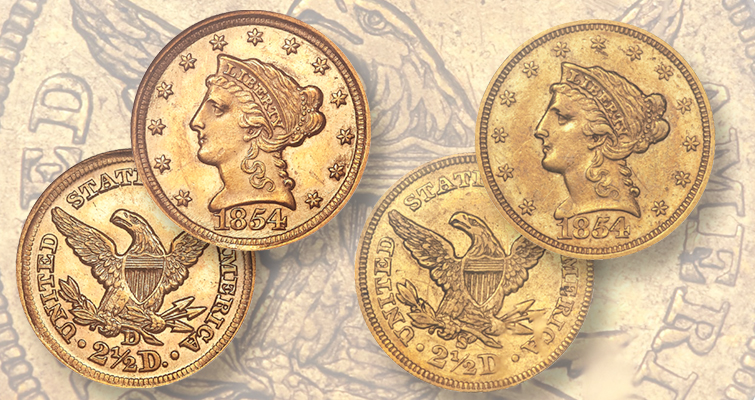 Three exceptional gold $2.50 quarter eagles are among the stars of Heritage’s various auctions during the Central States Numismatic Society’s 79th annual convention in Schaumburg, Illinois. The show is open to the public April 26 to 28, with Heritage’s U.S. Coin Platinum night set for April 26 and its U.S. Currency Platinum Night scheduled the next evening.

Of the seven examples traced, two are presumably off the market as they reside in the collections of the British Museum and the National Numismatic Collection at the Smithsonian Institution, leaving just five collectible examples.

No contemporary records from the Philadelphia Mint indicate the number of Proof pieces that were struck, but they were struck to order and John Dannreuther’s new book United States Proof Coins, Volume IV: Gold estimates that eight to 10 were originally struck. Given such a limited mintage, it is surprising that the seven known examples were struck from three different die pairs. The offered example is the Block 8, Second Head of 1837 variety, classified as JD-1 in the Dannreuther reference.

Heritage writes, “The coin possesses stunning eye appeal to complement its high technical grade,” adding, “The richly frosted devices contrast boldly with the deeply mirrored fields, creating an intense cameo effect.” A touch of striking softness is noted in Liberty’s hair below the coronet and a slight discoloration below the second T in STATES is observed.

Another standout is one of perhaps a dozen known 1854-S Coronet gold quarter eagles, the offered  example being graded Very Fine 35 by PCGS, from a low mintage of 246 pieces. 1854 marked the first year of operations at the San Francisco Mint and few seemed to recognize the specialness of these pieces at the time, since all known examples are circulated.

The San Francisco Mint struck all then-circulating gold denominations in its first year, except the $3 piece, but it’s unclear why the quarter eagle mintage was so low. Heritage writes, “In the case of the quarter eagles, while the circumstances surrounding the low mintage are lost today, it continues a trend that persisted throughout the denomination’s history at the Mint, to treat it as the ‘red-headed stepchild’ of U.S. gold coinage,” before speculating that perhaps bullion depositors during California’s Gold Rush preferred the larger-sized double eagle.

The issue is a legendary 19th century rarity, and among regular issue gold coins, only the 1875 Coronet $5 half eagle and 1875 $10 eagle have smaller mintages.

The offered example ranks in the middle of the roster of known examples provided by Heritage. It was last offered at Stack’s Bowers Galleries’ November 2013 Baltimore auction where it realized $282,000 and before that sold for $253,000 at an October 2011 Heritage sale. The PCGS certification insert records its inclusion in the Davis-Graves Collection (sold by Stack’s in 1954) and the Norweb Collection (offered by Bowers and Merena in 1988).

With luster visible in the protected areas and nearly Extremely Fine detail, it has eye appeal suggesting a higher grade, and as Stack’s Bowers observed in its 2013 offering, “it seems that PCGS may have net graded this piece to VF-35 to compensate for a series of wispy pin scratches and light scuffs in the fields that are more prevalent on the reverse.”

Another noteworthy Coronet gold quarter eagle is a 1854-D $2.50 coin graded Mint State 64 by NGC. Just 1,760 coins were struck from a single die pair where the 1 in the date is merged with the bust, and numerous die lines are clearly visible below the date. It is the finest-certified by either NGC or PCGS and was discovered in a small coin show in 1996.

Heritage notes that both sides showcase original, medium-gold color and adds, “The luster is frosted, and there is a slightly prooflike finish in the fields, which is far different from the typical dull, granular texture usually seen on this issue.”

Its first auction appearance was at a 1999 Heritage sale where it was then-graded MS-62 by PCGS and realized $63,250. At Heritage’s 2006 ANA National Money Show auction in Atlanta as part of the Duke’s Creek Collection — housed in the same NGC MS-64 holder where it currently resides — it brought $80,500. The current auction record for the issue is held by the finest certified at PCGS, an MS-63 coin that sold for $86,250 at an October 2011 Heritage sale. Like the subject coin, it too had been previously certified MS-62 by PCGS. 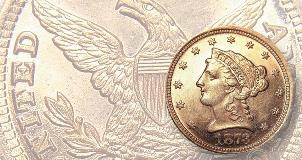 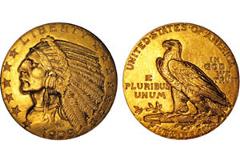 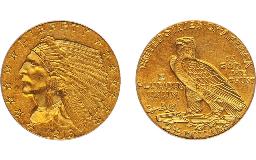