Quality is key for Franklin half dollars 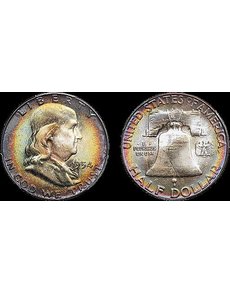 Franklin half dollars continue to generate enthusiasm and big prices from collectors who are willing to pay to get the best.

The series has no key dates, but in grades of Mint State 65 and finer, especially with full bell lines on the Liberty Bell on the reverse, some rarities emerge.

What was quite possibly the finest known 1951-S Franklin half dollar graded PCGS MS-67 full bell lines, with magnificent rainbow toning on both sides, sold for $20,700. PCGS has graded just one other in this grade, which has less toning and sold for $30,550 at an April 25 Heritage auction.

A PCGS MS-67 full bell lines 1950 half dollar with a green Certified Acceptance Corp. sticker (one of just six graded as such by PCGS) brought $16,100. For comparison, PCGS has graded six in MS-66+ full bell lines, an example of which brought $3,525 at an October 2012 Heritage auction.

Among the most beautiful of the offered half dollars was a PCGS MS-66+ full bell lines 1954 coin with rainbow toning on both sides, of which PCGS has recorded four submissions at this grade level and just one finer. It brought $5,750. Another handsomely toned piece was a 1958-D half dollar in MS-67 full bell lines with a green CAC sticker. Tied for the finest known at PCGS with 34 other pieces, it brought $1,955.

Lest one think that the market for these is predictable, of the 24 Franklin half dollars offered at the Goldbergs’ sale, 11 failed to meet their reserve and were reported as unsold on Sept. 24. Statistics like that help reiterate the fact that when it comes to coins that are conditionally rare, pricing can be challenging. ¦