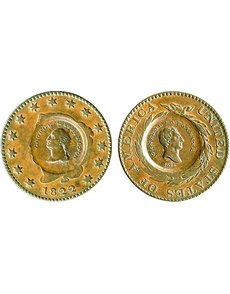 This copper 1822 Coronet cent was counterstamped in commemoration of the return visit in 1824 of Marquis de Lafayette, French hero of the American Revolution.

I have always been a collector at heart. Ever since I discovered the world’s greatest hobby (numismatics, in case you didn’t guess) as a young teenager in 1952, I have pursued series of interest.

First, I collected Lincoln cents in two blue Whitman folders. Then came Proof Indian Head cents (typically costing $3 to $5 each), then a type set of 48 different commemorative silver half dollars in Mint State (total cost a bit less than $400). I would form these sets, then sell them and go on to experience the excitement of discovering yet another series.

In 1955 I began collecting copper large cents of 1793 to 1857 with political, merchant and other counterstamps. I only knew of one other person seriously interested — Maurice (“Maury”) M. Gould, who with his partner Frank Washburn conducted the Copley Coin Co. in Boston. In time, Maury sold me his collection.

Such counterstamps had little value in the 1950s, and like as not, dealer friends who found them gifted them to me. Today in 2011 I still collect them, but now new acquisitions can be costly, and I only buy them occasionally.

A few years ago, I sorted through my collection and deaccessioned more than 2,000 pieces with names, such as J. Smith (to make up an example), that I knew I would never be able to identify.

Today my collection is in the hundreds of coins and is more manageable. Two counterstamps led me to write two books: The Strange Career of Dr. Wilkins, the most prolific counterstamper in the United States (he was a dentist, also ran a restaurant, kept a caged bear in front of his business in Pittsfield, N.H., and was charged with passing counterfeit money and suspected of burning a neighbor’s barn).

The other was The Waterford Water Cure, about a physician who practiced hydropathy (the water cure) in Waterford, Maine.

Writing the books was lots of fun, but sales were modest.

Among my favorites — but now quite rare and expensive — are copper cents counterstamped in 1824 in honor of the visit of Marquis de Lafayette, French hero of the American Revolution. A nice example is illustrated here. Congress in 1824 designated Lafayette as “The Nation’s Guest.”