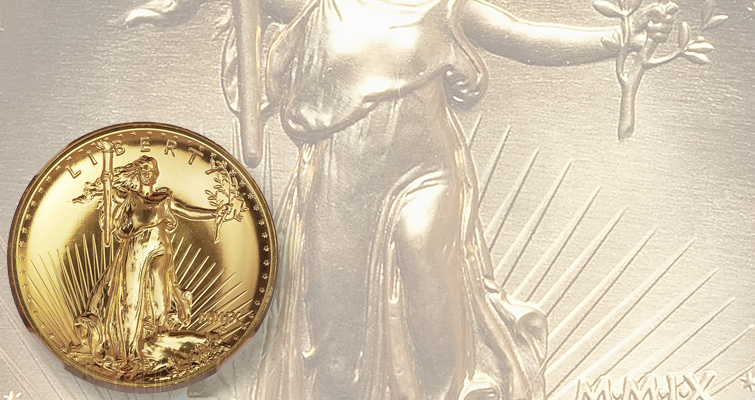 At first glance, prooflike bullion coins are immediately recognizable because they appear dark. Just one in 10 of the 2009 Saint-Gaudens, Ultra High Relief double eagles is prooflike. 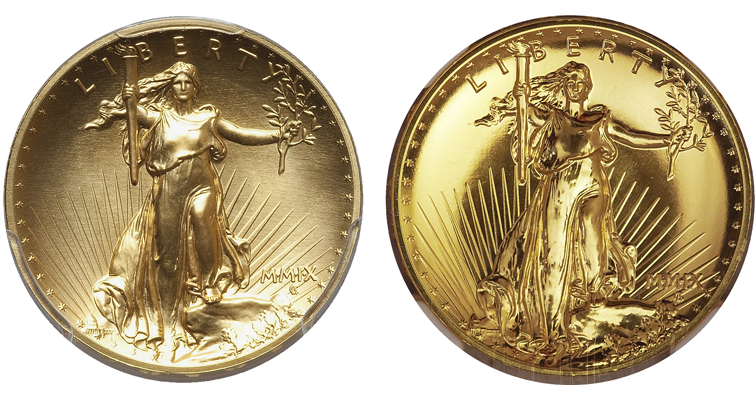 Most 2009 Saint-Gaudens, Ultra High Relief gold $20 double eagles have a Satin Finish, above left. Mirrored prooflike coins, above right, are worth a premium.

Prooflike versions of the bullion issues are not produced deliberately. Most often U.S. bullion coins are minted with a Matte or Satin Finish surface, but when they have a deeply reflective surface, they are called “prooflike.”

During grading, to determine if a coin is prooflike, graders will hold an object, usually a finger, above the coin’s surface. To qualify for the prooflike designation, the reflected image will need to be sharp throughout the entire field area on both obverse and reverse. Contrary to popular belief, sharpness of the image is more important than depth when judging the quality of reflection, as these coins have concave fields that do not reflect from great distance.

At first glance, prooflike bullion coins are immediately recognizable because they appear dark. This stark difference in appearance is one reason they are valuable. The other is rarity. Just one in 10 of the 2009 Saint-Gaudens, Ultra High Relief double eagles is prooflike.

The rarity is more extreme for the newly issued 2015-W American Liberty, High Relief gold coin, where just one coin in 40 is prooflike. Currently these coins are trading for three times the price of their nonprooflike counterparts.

The other three issues are considerably scarcer. Numismatic Guaranty Corp. has certified 83 examples of the 1986 American Eagle silver bullion coin as prooflike, out of 122,000 coins of that issue that NGC has certified!

No public trades are reported for the 1994 or 1995 issues. Their mystery and rarity adds to their allure.