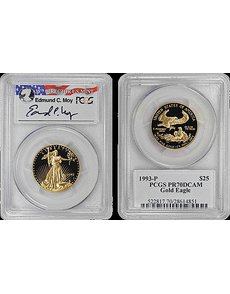 The coin itself, even in its perfect grade, is not unique. Of the mintage of 43,319 Proofs, PCGS’s population report shows 32 in the perfect grade, although only one has a Moy-signed label.

Historically the issue has been expensive in Proof 70 Deep Cameo, evidenced by a January 2006 Teletrade sale of one for $10,304.

Today, many more Proof American Eagle coins are sent directly to grading services, so the percentage of Proof 70 Deep Cameos being graded is much greater.

Among the PCGS-certified population of Proof 1987 $25 gold coins, around 2.5 percent are graded Proof 70 Deep Cameo.

For 1993 that drops to around 1 percent of all PCGS-certified Proof issues. For recent $25 Proof issues, Proof 70 Deep Cameos can approach 50 percent, as the U.S. Mint is producing a higher quality product and there’s less handling since the coins are going direct to the grading services. ¦