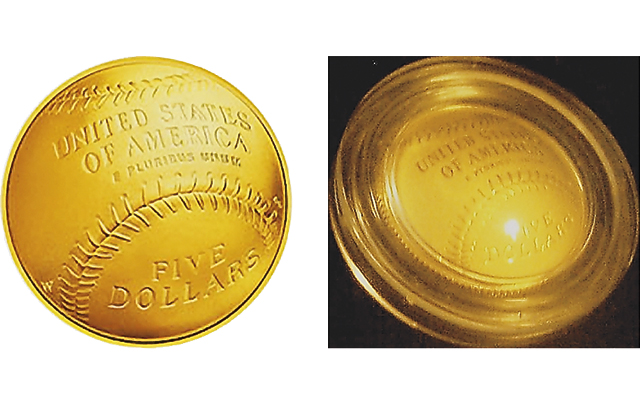 A collector who believed his Proof 2014-W National Baseball Hall of Fame gold $5 half eagle was missing the W Mint mark has learned the Mint mark is there. The collector's image, above right, was taken at an angle through the plastic U.S. Mint capsule, which obscured the Mint mark. Image at left from Mint shows the location of the Mint mark.

A Proof 2014-W National Baseball Hall of Fame gold $5 half eagle believed by its owner to be missing the W Mint mark is not missing the Mint mark after all.

A spokesman for Numismatic Guaranty Corp., the third-party grading service to which the collector submitted the coin for examination and grading, confirmed to Coin World April 21 that the W Mint mark is indeed on the coin.

The W Mint mark is positioned in the lower left of the coin’s reverse to the left of the stitching.

NGC had received the coin for examination on April 18.

The coin’s owner submitted blurry images taken of the coin in the plastic capsule that were posted online April 14 at MintNewsBlog.com. The angle at which the images were taken obscured any evidence of the Mint mark, which is oriented on an outer area of the convex or “domed” reverse.