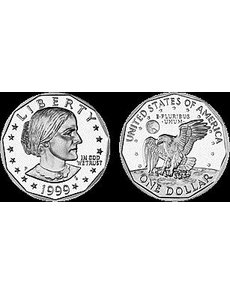 The Proof 1999-P Anthony dollar was a surprise to collectors, who expected the U.S. Mint to offer a San Francisco Mint strike. Coin World’s annual Guide to U.S. Coins lists the coin as having a mintage of 749,090 strikes.

Why is there so much different information about the mintage of the Proof 1999-P Susan B. Anthony dollar?

Collectors should expect some minor variance with the mintages reported for modern coin series like the Anthony dollar.

The different figures aren’t necessarily in error. Sales figures released by the U.S. Mint are fluid, and depending on their schedules, numismatic publications often receive their information from the Mint at different times of the year.

Though they strive to provide the most up-to-date mintages, hobby publications are at the mercy of the Mint for the information it provides at any given time.

The Proof 1999-P Anthony dollar was a late addition to the Mint’s offerings that year, being first made available for purchase Sept. 24, 1999. The coin was a surprise for collectors, who expected the Proof Anthony dollars they ordered from the Mint to bear the S Mint mark of the San Francisco Mint, as had been typical of Mint practices to that point.

In addition to being the last Anthony dollar strike, it was the first Proof version of a circulating coin struck at the Philadelphia Mint since 1964.

It is only the second Proof coin to bear a P Mint mark, the other being the 1942-P Jefferson 5-cent coin composed of the wartime silver composition of 56 percent copper, 35 percent silver and 9 percent manganese.

All other pre-1964 Proof coins struck at the Philadelphia Mint exhibit no Mint mark.

In the Aug. 11, 2003, issue of Coin World, nearly four years after the coins were first offered, Paul Gilkes reported that the Mint was still offering for sale both the Proof 1999-P Anthony dollar and the Uncirculated 1999-P and 1999-D Anthony dollars as a two-coin set.

Coin World first listed the 749,090 mintage for the Proof 1999-P Anthony dollar in its 2005 edition of Coin World’s Guide to U.S. Coins. The mintage listed is in harmony with the 750,000 maximum mintage reported in The Standard Catalog of World Coins.

As for the omission of the mintage for the Proof 1999-P dollar in the Red Book and Blue Book, it is recommended that Mr. Junkas contact the publisher of those works directly for clarification.