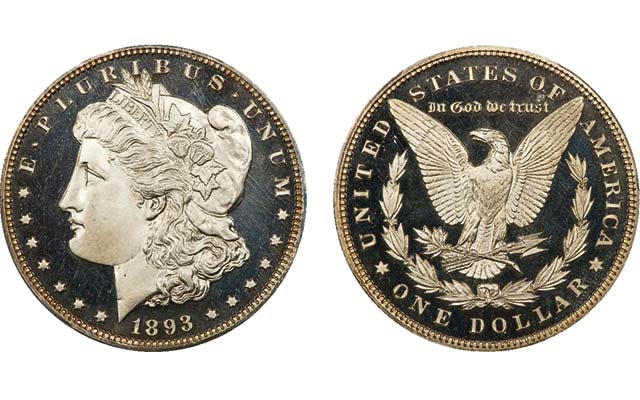 The select auction of 352 lots was held in conjunction with the PCGS Members Only Show at The Venetian hotel.

Legend describes the piece: “A mind blowing masterpiece! Ultra deep, watery mirrors are crystal clear, ultra clean, and have incredible reflectivity. A very faint shade of gold can be detected by the rims. Miss Liberty and the details are thickly frosted and have razor sharp strikes. The eye appeal is tremendous!”

The firm notes that of the mintage of just 792 pieces, PCGS has graded one in this grade and one Proof 68 Deep Cameo example, “but it’s locked up in a major collection.”

An 1898 dollar graded PCGS Proof 67 Deep Cameo CAC with dramatic black and white cameo contrast brought $35,250. The fields were described as follows: “Overall, the mirrors are ultra deep and clean, with extreme clarity and blinding reflectivity. The mirrors roll so dramatically when you twirl this coin that you may never put it down.”

The next lot, an 1899 dollar in PCGS Proof 68 CAC, brought $43,475. The cataloger remarked, “One look and you’ll be able to tell that this magnificent gem was carefully stored from the day it left the bank.” Or, perhaps, the Philadelphia Mint.