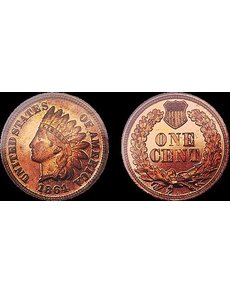 The Snow-PR2 variety coin (The Flying Eagle and Indian Cent Attribution Guide, Vol. 2: 1859-1869 by Richard Snow) was one of 3,894 lots of United States coins offered in six floor sessions Sept. 25 to 27. The sale was held in conjunction with the Long Beach Coin, Stamp & Sports Collectible Expo.

Of the 3,894 lots offered, Heritage officials recorded 95 percent as sold. The sold lots brought total prices realized of $15,612,370 for all floor sessions, according to Sept. 30 figures from Heritage.

A transitional year for cents

The year 1864 was a transitional one for the Indian Head cent, with two significant changes made at different times during the year. The original composition of 88 percent copper and 22 percent nickel was replaced with an alloy of 95 percent copper and 5 percent tin and zinc (bronze) after passage of an April 1864 act; the first of the new bronze cents were struck with the obverse portrait introduced in 1860.

Later in 1864, as the striking of the bronze cents continued, the portrait of Liberty was refined, with the tip of the bust made more pointed and the initial L added to the design. The L is Chief Engraver James B. Longacre’s surname initial, which he placed in the ribbon of the headdress when he modified the portrait.

The Snow-PR2 variety sold is one of only 20 Proof 1864 Indian Head, Designer’s Initial L cents extant from an approximate total population of up to 40 of all three varieties, reported to have been struck in two separate production runs at the Philadelphia Mint. Nine or 10 examples of the Snow-PR2 variety are known.

The cent in the recent auction was once part of the famed numismatic collection of Ambassador R. Henry and Mrs. Emery May Norweb, sold by Auctions by Bowers and Merena in its Oct. 12 and 13, 1987, sale.

Snow writes in his reference that the key to identifying the Snow-PR2 variety is a raised, obverse die line as struck that runs diagonally from southwest to northeast just under Liberty’s jaw.

This assessment matches the diagnostics given by Walter Breen in his 1977 book Walter Breen’s Encyclopedia of United States and Colonial Proof Coins: 1722-1977.

Snow-PR2 also has the date far to the right of Liberty’s bust point.

Breen’s 1977 reference stated that only one die pair was used to strike the Proof 1864 Indian Head, Designer’s Initial L cent. After an example from another obverse appeared at auction in 1984, Breen recanted his position that the only true examples of Proofs for 1864 bearing the designer’s initial L were the ones that Snow would later identify as Snow-PR2.

Snow, in 1997, identified a third distinct variety, and showed that Proof 1864 Indian Head cents with the designer’s initial were produced from three obverse dies and two reverse dies.

According to the auction lot description for the Snow-PR 2 coin sold Sept. 27 by Heritage, the initial Proof delivery of the 1864 Indian Head, Designer’s Initial L cents comprised 10 to 20 examples.

“These coins were either held as die trials or sold to collectors in a random manner,” according to the auction lot description. “Mint officials probably considered the addition of Longacre’s initial to be a minor change that was not worthy of special consideration.” However, the Proof 1864 Indian Head, Designer’s Initial L cents were already the talk of the hobby by the time Dr. Henry Linderman began his first term as U.S. Mint director in 1867.

“At least 10 (and perhaps more) additional 1864 L on Ribbon proofs were struck sometime around 1871, including the present coin,” according to the auction lot description. “Rick Snow is credited with this discovery by matching the reverse die of the present example with the regular issue proof dies of that year. The unique die lines on the reverse are the same as on proofs from 1869 through 1871, although the 1869 and 1870 proofs were from earlier die states.”

Snow identified the currently unique example of the third die marriage, Snow-PR3, when it was offered in Bowers and Merena’s March 6 to 8, 1997, auction.