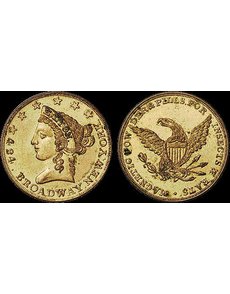 The token shown this month advertises Lyon’s Magnetic Powder & Pills. The first, sold by the bottle, guaranteed elimination of cockroaches, bed bugs, moths, ants, fleas and insects on plants. The latter, sold by the box, was warranted to destroy “rats and mice within five minutes after being thrown into their vicinity,” according to Lyon.

Lyon sold both preparations for 50 cents at his “principal depot,” 424 Broadway, New York City, and nationwide through distributors.

This brass, 28-millimeter token employs the ubiquitous Scovill Manufacturing Co.’s Liberty Head facsimile on obverse (note E. LYON in place of LIBERTY on headband), and Spread Eagle reverse that appeared contemporaneously on U.S. gold coins, which the brass tokens were meant to mimic. A second style of token pictures a right-facing bust of Emanuel Lyon, the manufacturer of these proprietary products.

Emanuel Thomas Lyon (born circa 1815) emigrated from Germany. He graduated from Princeton in the 1840s. He became a chemist in New York City later in that decade. After experimentation, he hit upon the formula for his Magnetic Powder, which was a fine dust that could be spread on plants and around floorboards where insect pests lived.

Emanuel Lyon’s preparations were certifiably famous in their heyday before the U.S. Civil War. The other variety of Lyon’s token sports a facsimile of the American Institute’s award medal, which Lyon’s preparations had won in 1848 and 1850. His Magnetic Powder also was honored at the 1851 World’s Fair in London. Lyon was notified of his honor when his medal, certificate and copy of the jury report was transmitted to him Jan. 31, 1853, by U.S. President Millard Fillmore. Lyon also received medals from Russia, France and Germany.

Lyon’s recognitions stemmed from his exclusion of toxic poisons in his vermicides. Affidavits from chemists certified that Lyon’s products contained only vegetable products, specifically an exotic Asian plant, the powdered leaves of which were deadly. “The idea of being rid of these pests is a luxury,” his ads claimed. Fourteen intact green bottles of Lyon’s Magnetic Powder were recovered along with the fabulous trove of gold $10 and $20 coins aboard the wreck of the SS Republic.

Lyon was also the proprietor of Lyon’s Kathairon hair tonic, which “promoted the luxuriant growth and beauty of the hair,” he claimed. Lyon eventually sold this hair tonic to Demas Barnes, a half owner of the famous Drake’s Plantation Bitters. Barnes marketed Lyon’s hair oil with a label displaying a facsimile of Lyon’s signature and the warning “Beware of imitations and counterfeits.” Lyon’s Kathairon bottles were also found on the SS Republic.

FRED L. REED III has been a collector and writer for many years. Reach him at www.fredwritesright.com.