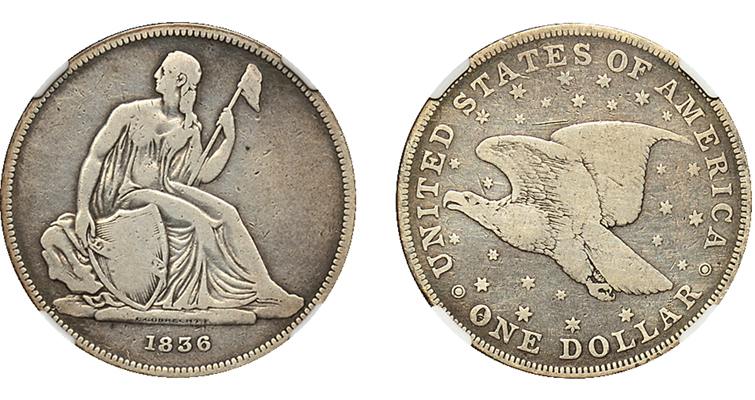 Scotsman Auction Co.’s 2015 Midwest Summer Sale showcased 1,118 lots and realized $1,657,502. Among the wide range of coins in the July 24 auction were numerous key-date rarities in solid, collector grades and group lots where the winning bid was sometimes double or triple the estimate. The auction was held alongside the Missouri Numismatic Society’s 155th annual coin show, July 23 to 25, at the Saint Charles Convention Center. Here is one of three lots we’re analyzing that offered a blend of rarity and value.

Gobrecht dollars dated 1836 through 1839 are sometimes collected alongside regular issue coins, but they are generally classified as patterns. This 1836 Gobrecht dollar is numbered Judd 60 in the standard pattern reference and features coin alignment of the obverse and reverse dies where the eagle on the reverse flies upward and left. The designer Christian Gobrecht’s name is clearly visible on the base (an attribute left off of the circulation Seated Liberty dollars).

Only three letters of LIBERTY on the shield are visible, but, as Scotsman reminds bidders, “grading standards for a Gobrecht dollar depend very little on the number of letters visible.”

The problem-free coin is graded Fine 15 by Numismatic Guaranty Corp. and the surfaces show handsome contrast between dark gray fields and lighter devices. The collector-friendly coin sold for $6,095 (or $5,300 plus the 15 percent buyer’s fee), exceeding the estimate of $4,500 to $5,200.