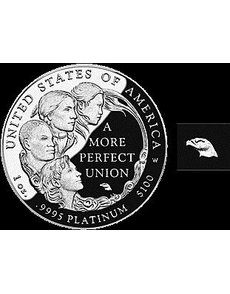 The U.S. Mint added an eagle privy mark to the reverse of the Proof 2009-W American Eagle platinum $100 coin.

Many hobbyists are familiar with silverware hallmarks identifying the metal’s purity, maker, and city and date of manufacture.

Just as a certain hallmark by a country’s assay office might identify a silversmith, a privy mark — a common symbol or object — also acknowledges engravers. French coinage makes use of the privy for this purpose, such as a bee for engraver Pierre Rodier or hunting horn for Hubert Larivière.

Gamble’s design was the first in the Mint’s platinum coin program, a program with a theme based on the preamble of the U.S. Constitution and set to end in 2014. Designs focus on such phrases as “To Form a More Perfect Union” (2009), “To Establish Justice” (2010), “To Insure Domestic Tranquility” (2011), “To Provide for the Common Defence” (2012), “To Promote the General Welfare” (2013) and “To Secure the Blessings of Liberty to Ourselves and our Posterity” (2014).

Gamble’s coin has heads of men and women representing ethnic groups, their hair flowing together to create a frame. Under the inscription A MORE PERFECT UNION is an eagle privy mark (raptor’s head) that the Mint reports was “from an original ‘coin punch’ ” identified at its Philadelphia facility.

The privy mark here is a design component that mitigates artistic “busy-ness” of too many devices for the canvas of a planchet, an issue in many modern commemorative coins. Gamble’s rendition is cleaner for the privy mark rather than, say, a variation of the eagle with olive branch and arrows, as appears on the Great Seal of the United States.

Privy marks are common in world coinage. Canada has used the symbol as both a design and commercial component in its Maple Leaf 1-ounce silver $5 series. You’ll find privy marks of the Chinese and Western zodiacs. A 2005 coin has a privy mark of a tank to celebrate “Victory in Europe Day.” One of the most popular Maple Leaf coins is dated 1998 with a Titanic privy mark and low mintage of 26,000.

Canada’s use of the privy mark also is economical. Other mints, including the United States Mint, might be tempted to issue a series of coins in various denominations based on a commemorative occasion.

At the November 2010 meeting of the Citizens Coinage Advisory Committee, of which I am a member, we discussed proposed commemoratives: a copper-nickel clad half dollar and a silver dollar to honor the 150th anniversary of the American Society for the Prevention of Cruelty to Animals. (Another program would honor Route 66, with a recommendation for eight coins — one for each state the highway runs through.)

Of course, it didn’t occur to me at the time, but a privy mark on one coin for each proposal — featuring different animals for the ASPCA and for each of the Route 66 states — would be a cost-saving feature for both the Mint and hobbyists.

Privy marks serve various purposes — one of which might be to encourage you to look at hallmarks on your silverware and jewelry.