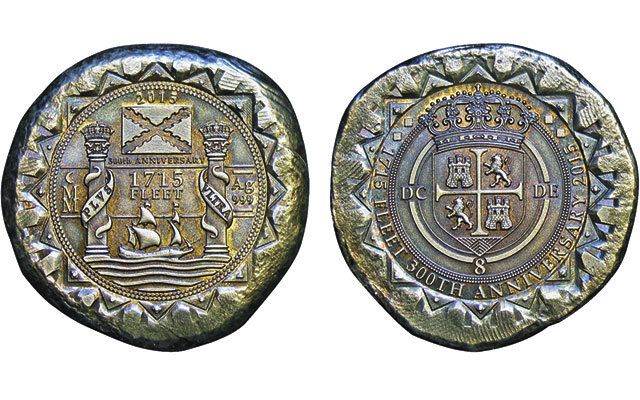 The 1715 Fleet silver cob commemoratives incorporate modern elements with elements from genuine cobs so that the two may be easily differentiated. 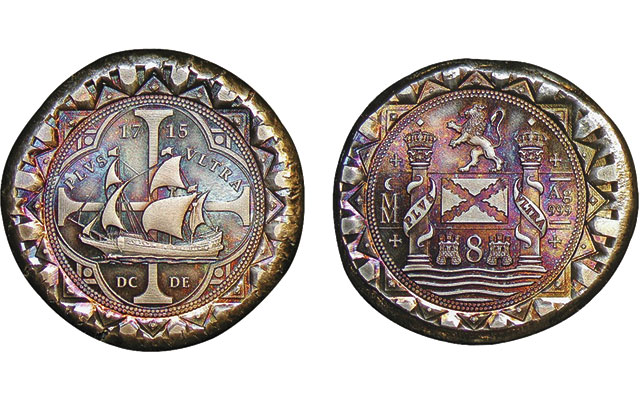 The Color-Toned appearance on this silver cob commemorative was executed using a proprietary chemical solution after striking that leaves Mint luster intact. 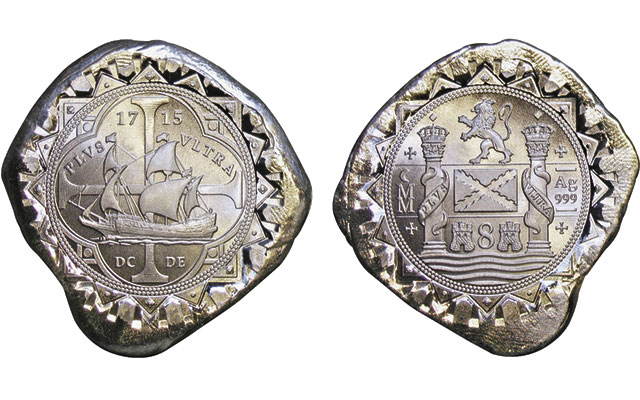 DC and DE below the ship are the initials of Daniel Carr as mintmaster and David Emslie as assayer. A crescent moon and stacked M’s by the pillar represent the Moonlight Mint. This piece has the Brilliant Satin Finish.

To mark the tercentennial of the destruction of the 1715 Spanish fleet off the coast of Florida during a violent storm, Daniel Carr and his Moonlight Mint are producing commemorative cobs with several designs in different metals and finishes.

Carr is also producing a number of unrelated pieces marking the 1622 treasure wreck of the Nuestra Senora de la Atocha.

The 1715 Fleet commemorative cobs will bear elements from the Spanish Colonial coins of the period, but will also incorporate modern elements to easily differentiate the new pieces from genuine coins.

Genuine cobs are silver and gold coins struck from the 16th through 18th centuries at Spanish Colonial mints, including in Mexico, Peru, and Colombia, among others.

The Spanish Colonial silver cobs were denominated as reales and the gold as escudos. Some original cobs were struck with a date, with most exhibiting a Mint mark designating location of manufacture and an assayer’s mark to designate the official responsible for assuring weight and fineness. Most cobs are irregular in shape and vary in thickness due to the primitive minting techniques used in making the coins.

While some of Carr’s pieces are being struck in brass, and offered separately in gold as a special order, the remainder of the issues are being produced in silver.

Carr’s irregularly shaped silver cobs are being struck on poured blanks of silver that assayer David Emslie has refined using some 1715 Fleet silver, recovered in the form of low-grade cobs obtained from metal detecting finds in Florida. The melted silver was refined to .999 fine and then mixed with a larger amount of .999 fine silver, according to Carr.

Also included in the mixture were some scrapped and refined silver rounds that treasure salvor Mel Fisher produced circa 1986, from low-grade cob silver that his team recovered from the 1622 shipwreck Nuestra Señora de la Atocha, a sunken Spanish galleon off the Florida Keys.

Carr said all of the silver commemorative cobs contain trace amounts of both 1715 Fleet silver and Atocha silver.

The gold is commercially acquired from various sources and does not include metal from treasure finds. It is refined to .999+, Carr said, noting the gold is generally not from shipwreck recovery. So far, four 1-ounce gold pieces have been struck in the cob style.

Carr said he may also may strike some cobs on standard 34-millimeter blanks, since the cob die faces are 34 millimeters in diameter. Carr said he also has plain and reeded edge collars that size as well.

Design elements from original cobs that are being used on the 1715 Fleet 300th Anniversary commemorative pieces (Carr does not distinguish between obverse and reverse sides) are:

??Pillars of Hercules (gateway to New World) with waves below.

1715 Fleet 300th Anniversary issue design elements being used that are not found on original cobs are:

??Spiral hurricane-like symbol. As of Jan. 19, this design was not yet pictured online, but is similar to the 1715 Fleet design of a Spanish galleon backed by a Jerusalem cross, except that the ship faces the opposite direction and the hurricane spiral replaces the Jerusalem cross in the background.

The 1622 Atocha issue design elements are similar to those for the 1715 Fleet issue, except primarily for the date and name of the galleon.

Carr said he designed, sculptured, engraved and is striking the commemorative pieces. Each piece will be struck once with 80 to 100 tons of pressure on a Gräbener coinage press that previously saw extended service at the Denver Mint.

While the brass blanks are round, 34 millimeters, and machine-made from an outside vendor, the silver and gold blanks are being fabricated by hand, one at a time.

The refined silver or gold is heated to temperatures until molten, then poured into a water bath to produce casting grain or pellets.

Sufficient granules are then removed to weigh 28 grams of .999 fine silver or .9999 fine gold.

The specified weight of silver or gold granules is then placed on a heat-resistant flat surface, such as graphite, and melted into a single blob of metal using a torch. Once cooled, each blob is burnished before being individually fed, manually, between the dies on the coinage press, and broadstruck, without a confining collar.

Burnishing is achieved either by tumbling the blanks with steel media or by wire brushing, Carr said.

To execute the Brilliant Satin Finish he uses, Carr said, the blanks are struck without any additional treatment beyond the pre-strike burnishing of the blanks.

His Color-Toned pieces are first struck then subjected to a proprietary chemical treatment to enhance the color but leave Mint luster.

The Antiqued Finish is achieved through a multistep, post-strike process.

To achieve the Antiqued Finish, the struck piece is burnished using aluminum oxide powder under high pressure, resulting in a matte finish. Then, a dark patina is executed by immersing the piece in a proprietary, sulfur-based chemical treatment. The piece is then hand burnished with aluminum oxide powder, which wears the dark patina on the high points, leaving the high points lighter than the dark recesses, providing an aesthetic contrast.