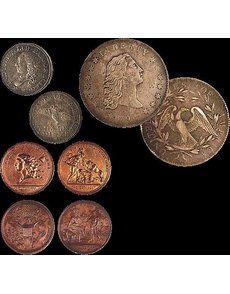 Coins to be displayed in an exhibition at Princeton University March 3 to July 8, include, clockwise from upper left, a 1792 silver half disme, a 1794 Flowing Hair silver dollar, a 1791 Augustin Dupré bronze Diplomatic medal and a 1783 gilt bronze Libertas Americana medal by Dupré.

An exhibition of coins, medals, bank notes, and related books, manuscripts and graphic arts from the Princeton University collections will be presented in a display titled “Capping Liberty.”

The exhibition will be housed at the Milberg Gallery, Firestone Library, March 3 to July 8.

Items from Princeton University Library’s Department of Rare Books and Special Collections serve as the basis of the exhibition, illustrating the search for imagery and the selection and adoption of symbols for a national coinage.

“The star of the show will undoubtedly be the Princeton specimen of the 1792 half disme,” predicts Alan M. Stahl, the exhibition’s curator. The 1792 half disme pattern is a “superb example” of the first coin minted by the United States government under the Constitution. Delays in passing the Mint Act of 1792 left little time to strike coins that year, so a very small issue of half dismes (the old French spelling was used on the piece) was minted in a temporary facility, reputedly from silver supplied by George Washington for the purpose. Fewer than 2,000 examples are believed to have been struck.

The 1792 half disme in Princeton’s collection was purchased by Charles A. Cass, Princeton class of 1904, from an auction in 1917 by Thomas Elder where it was described as “the finest known specimen of this exceedingly rare coin.” It came to Princeton with the Cass numismatic collection by bequest in 1958. The half disme was characterized by Roger Siboni, president of the American Numismatic Society, as “perhaps the finest, or one of the finest 1792 half dismes in existence” in a Sept. 1, 2008, Coin World article.

Other important coins from the Princeton University Numismatic Collection in the exhibition are four issues of the 17th century Massachusetts silver shilling coinage, two examples of the tin Continental dollar patterns of 1776, and a 1794 Flowing Hair, 14 Star silver dollar.

The “poster piece” of the exhibition, according to Stahl, is the gilt bronze striking of Augustin Dupré’s 1783 Libertas Americana medal, a gift of Rodman Wanamaker, Princeton class of 1886, which is believed it have been the basis for the depiction of Liberty on early United States coinage. It is accompanied by a selection of ancient coins that inspired it, including a Sicilian dekadrachm and a series of denarii of the Roman Republic and sestertii of the Roman Empire that show the goddess Libertas and her distinctive cap.

Other important medals in the exhibition are an original bronze striking of Dupré’s Diplomatic medal of 1791 (one of only three known), a gift of Cornelius Vermeule III, noted scholar of ancient and American coinage, and a hand-engraved medal believed to have been given to Henry “Light-Horse Harry” Lee (Princeton class of 1773). Also on display are three unique plaster molds made by Jean-Baptiste Nini as preparatory models for his famous terra-cotta medallions of Benjamin Franklin.

Complementing the coins and medals from the Princeton University Numismatic Collection are many items from other divisions of Princeton’s Special Collection, including books formerly in the libraries of Benjamin Franklin, George Washington and Thomas Jefferson.

Among the depictions of Liberty from Colonial publications is the portrait of John Hancock engraved in 1774 by silversmith Paul Revere, where the patriot is flanked by a knight with a copy of the Magna Carta and Liberty with her cap.

A 1778 print attributed to the painter Jean-Honoré Fragonard depicts Benjamin Franklin crowned by the goddess Liberty, and a large piece of Toile de Jouy fabric printed around 1785 has the image of George Washington in a gold chariot drawn by cheetahs.

On Sunday, May 6, the noted scholar of American Colonial coinage, Louis Jordan, of the University of Notre Dame, will give a public lecture titled “Transformations in Numismatic Iconography during the American Revolution” at 4:00 p.m. in 101 McCormick Hall on the Princeton campus.

The lecture will be preceded at 2:30 p.m. by a curatorial tour of the exhibition in Firestone Library by Stahl, Princeton’s curator of numismatics. A reception in Firestone Library will follow the lecture. Additional curatorial tours will be held on Sunday, March 25, and Thursday, May 31, both at 2:30 p.m. The exhibition and its associated events are free and open to the public.

A website devoted to the exhibition, including high-resolution images of obverses and reverses of all coins on display and images from the other materials, can be found at http://rbsc.princeton.edu/capping-liberty and will remain on the website after the close of the exhibition.

Further information on this exhibit can be obtained from Alan Stahl, curator of numismatics, by email at astahl@princeton.edu or by telephone at 609-258-9127. ¦