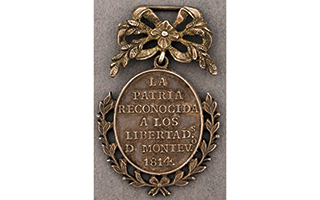 To celebrate the 200th anniversary of Latin Americas wars of independence, the Princeton University Library is exhibiting medals and orders that were awarded to soldiers and civilians in the form of wearable insignia.

"From a Thankful Nation" opened Feb. 25 in the main exhibition gallery of Firestone Library on the Princeton campus, and continues through Aug. 3.

The exhibition features hundreds of Latin American decorations, with examples from a wide range of styles. One, a plain silver medal, was awarded to an officer of the Buenos Aires armed forces that freed Montevideo from Spanish colonial rule in 1814. Another is Guatemalas highest award given to foreign presidents, the Collar of the Order of the Quetzal, with Mayan motifs. A third piece is a gilt example of the Cuban Order of Che Guevara, awarded for assistance to Latin Americas many left-wing movements of national liberation.

According to the university, "Unlike the United States, which has generally avoided the award and wearing of medals as a vestige of European royal practice, the Spanish-, Portuguese-, and French-speaking nations of the New World have embraced such displays as tangible expressions of appreciation for the efforts of their soldiers and citizens."

Miguel Angel Centeno, professor of Sociology and International Affairs and chair of Princetons Department of Sociology, writes in an introduction to the exhibition catalog, "These medals and orders allow us a unique perspective on the development of Latin American states and the qualities they have chosen to represent and reward."

Centeno is scheduled to lecture on the ideals exemplified by the pieces in the exhibit on April 13 at 3 p.m., which is to be preceded by a curatorial tour of the exhibition at 1:30 p.m. and followed by a reception. An additional curatorial tour is slated for May 29, at 3 p.m.

The exhibition is also documented in a fully illustrated website: http://rbsc.princeton.edu/thankful-nation/.

"From a Thankful Nation" is open to the public without charge on weekdays from 9 a.m. to 5 p.m. and on weekends from noon to 5 p.m.

For more information, telephone Stahl at 609-258-9127 or email him at astahl@princeton.edu.