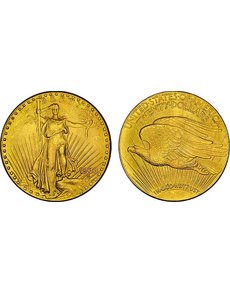 As the trial to determine who owns the “Langbord 10” 1933 Saint-Gaudens gold $20 double eagles is scheduled to begin July 7 in a Philadelphia federal courtroom, many are wondering what these coins are worth.

We know what the coins grade since Numismatic Guaranty Corp. reported Nov. 3, 2009, that it had graded one coin Mint State 66, two MS-65, six MS-64 and one with an NGC Uncirculated Details, Improperly Cleaned grade.

When pricing any object, one first looks at comparables — other objects of similar type and quality and the prices they sold for. In 2002, the 1933 double eagle allegedly owned by Egypt’s King Farouk sold for $7,590,000 at auction. It graded MS-65 and was — and currently is — the only 1933 double eagle that can be legally owned by an individual.

So if the coins are ruled private property, are the “Langbord 10” worth around $7 million each?

That’s unlikely. When multiple examples of an object enter a market, the demand/supply ratio changes. While the added publicity helps — meaning that more people know what a 1933 double eagle is and may want one — it’s not enough to compensate for the fact that the coins are not unique.

A parallel in the art market is when an artist’s estate is valued for estate tax purposes, a blockage discount is sometimes used. This assumes that the works are sold at once, depressing the market. To maximize value, prudent estates use long-range marketing, which places objects into the market slowly, responding to the ebbs and flows of demand and artist reputation.

What pricing comparables do the 1933 double eagles have?

Perhaps most obvious is the 1927-D Saint-Gaudens double eagle, considered by some the rarest regular issue coin of the 20th century. Around 10 are collectible today from a mintage of 180,000. They are sold infrequently. The last example at public auction was an MS-66 that realized $1.495 million at a January 2010 auction.

Seeing that the prices for the top objects in many collecting categories are going sky high, with proper marketing to buyers beyond the existing coin-market, the 10 Langbord 1933 double eagle coins could be worth around $2 million each, perhaps more.

But how many more examples remain to be discovered is a troubling, lingering question. ¦