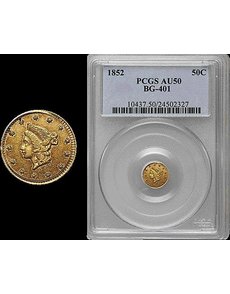 This California fractional 1852 50-cent gold piece features a Liberty design similar to the Coronet gold coins circulating at the time. This piece graded About Uncirculated 50 sold for $207 at a July 15, 2012, Heritage Auction.

Perhaps an accurate price guide for this series will help collectors feel more confident when purchasing an example.

In a 2000 Coin World article, Robert H. Lande and Jack Totheroh wrote, “Understandably, many coin collectors who are intrigued at the prospect of adding a few of these beautiful and fascinating parts of the California Gold Rush era to their coin collection are stopped by the possibility that they may be overcharged.”

These tiny pieces were privately struck from 1852 to 1882 and came in 25-cent, 50-cent and $1 denominations. More than 450 varieties are known and new varieties are found occasionally.

They were struck to meet demand for small-denomination coins in northern California, but they didn’t enjoy wide circulation. Produced with rather primitive minting technologies some are beautiful and some are charmingly crude.

“Breen-Gillio” references Walter Breen and Ronald Gillio’s California Pioneer Fractional Gold. They wrote in 1983: “California fractional gold has remained for over a century the most enigmatic and the most undervalued series in American numismatics. It has suffered from a lack of information, from misinformation and from poor reference works.”

Thankfully for collectors, this series can also be wonderfully accessible, with handsome certified, problem-free About Uncirculated examples available to purchase at the $200 to $300 level. From a historic perspective, these are perhaps more interesting as their slight wear attests to usage.

Collectors curious about the series can find examples at the $150 level, but these examples have problems, such as bending or mounting from use as jewelry. Fakes abound, so third-party authentication is recommended.

Those looking for “investment grade” coins can occasionally find common examples at auction certified as Mint State 65 for $550 to $600, and even examples in MS-67 are sometimes seen. ¦