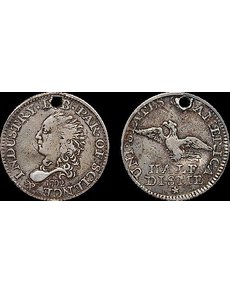 That this pattern 1792 half disme had a prominent hole at the top of it did not stop a bidder from paying $38,525 when it was offered at Scotsman’ Oct. 18 auction in St. Charles, Mo.

When it comes to the problems that a coin can have, a hole is about the worst there is. Yet, a robust market exists at auction for rare coins with holes.

The term “contemporary hole” means in plain language that the hole has been there for a while. The catalog notes that the hole was punched through the planchet rather than drilled, stating, “The piercing edges were pressed down with care such that the offense is as tidy as a contemporary hole can be.”

Scotsman had another holed rarity in the sale: a 1796 Draped Bust quarter dollar graded Numismatic Guaranty Corp. About Uncirculated Details, Holed. This hole differed from the 1792 half disme in that it was not as neat.

The lot description aptly described the coin’s problem, stating, “A sizable piercing at 12:00 appears particularly ragged when viewed from the reverse, and evidently was punched rather than drilled, as one might guess from the bent planchet.” Against a modest estimate of $5,000 to $7,000, it brought $11,500.

For reference, on Dec. 13, 2011, Heritage auctioned a PCGS Good 6 example of this coveted type coin for the same amount.

Coins with holes that have been repaired are called “plugged” and if a repair is done well, a “plugged” coin may be rather inoffensive and may make an otherwise unaffordable coin affordable.

On Oct. 15, 2013, Heritage sold an NGC Very Fine Details, Plugged, 1843 Seated Liberty dollar for $188. With problem-free examples in that grade approaching $400, the well-executed repair made the coin more accessible.

Just as all holes in coins aren’t of equal severity, plugs are executed with varying degrees of skill.