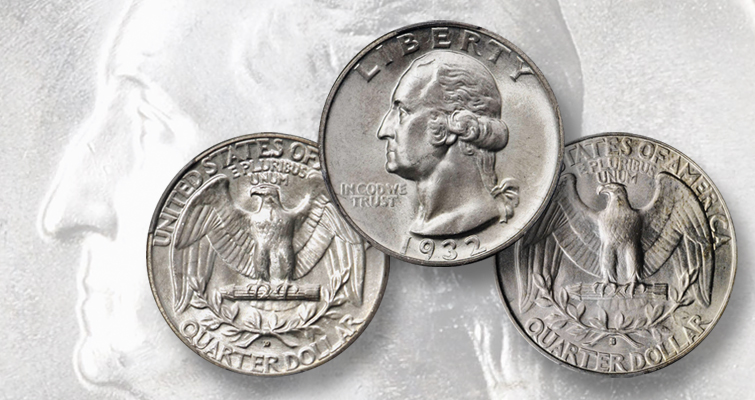 PCGS has graded no finer examples than these two key date 1932-D and 1932-S Washington quarter dollars, each graded MS-66, which sold for $75,000 and $38,400 respectively at Stack’s Bowers Galleries’ March 25 auction. The series remains popular with collectors. 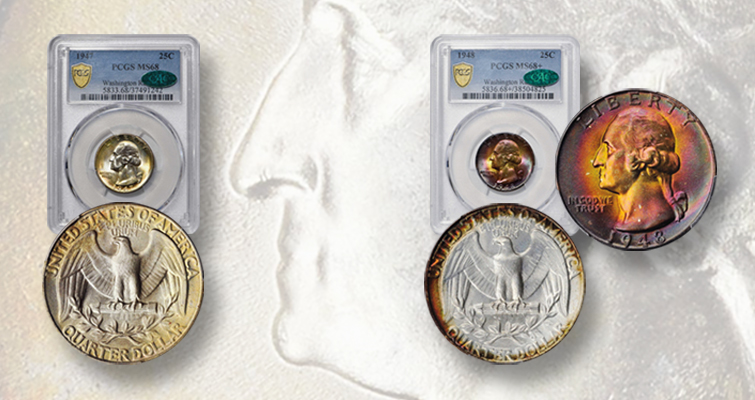 An MS-68 1947 Washington quarter dollar (left above) and an MS-68+ 1948 quarter (right above), both with green CAC stickers, each the sole finest examples of its date graded at PCGS, respectively realized $32,400 and $43,200 as part of the Washington Rainbows Collection. 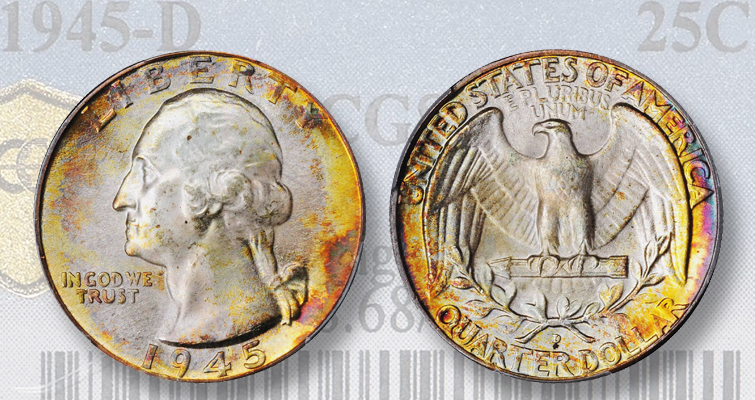 The sole finest 1945-D Washington quarter dollar at PCGS, graded MS-68, was one of the many Mint marked highlights in the collection. It brought $20,400.

Washington quarter dollars were first minted in 1932 to celebrate the bicentennial of George Washington’s birth, and the series remains, nearly 90 years later, very popular with collectors, as seen with Stack’s Bowers Galleries’ successful offering of the Washington Rainbows Collection at its March 25 Las Vegas Auction.

Twenty-six of the 83 coins in the set are graded Mint State 68 or MS-68+, and it is the all-time finest Professional Coin Grading Service Registry Set of Silver Washington quarter dollars, 1932 to 1964. Beyond technical grades, the set was assembled with an eye toward quarters displaying exceptional toning.

Collectors who focus on putting together date and Mint mark sets of the issue are familiar with the two key dates in the series: the 1932-D and 1932-S Washington quarter dollars, which had low mintages, in part because of reduced demand for coins during the Great Depression. The Denver Mint issue saw a low mintage of 436,800 pieces, and it is considered the rarest in the series in grades of Mint State 64 and finer. As evidence, PCGS has graded just two in MS-66 with none graded higher. The offered example was essentially untoned, with the cataloger reporting about the clean surfaces, “dusted with pale silver and sandy-gold iridescence, both sides are highly lustrous with a full quota of billowy mint frost.” It sold for $75,000.

The collection’s San Francisco Mint representative from 1932 is from a lower mintage of 408,000, of which PCGS has graded just five in MS-66 with none finer. Regarding the offered quarter, “Delicate champagne-gold toning on the reverse gives way to brilliance on the obverse,” with the description adding, “both sides are fully frosted in finish with a razor sharp strike and outstanding surface preservation.” It realized $38,400.

Beyond key dates, the collection offered some condition rarities that become tough in very top grades, while circulated examples sell for little more than the silver “melt” value. The set’s 1947 Washington quarter dollar graded MS-68 by PCGS with a green Certified Acceptance Corp. sticker is the sole-finest graded by PCGS. It sold for $32,400. The surfaces are distinguished by delicate toning: “Halos of lovely pinkish-apricot and champagne-gold iridescence ring the peripheries and frame essentially brilliant centers.” It’s a common coin even in lower Mint State grades, with PCGS grading 134 in MS-67 and 27 in MS-67+, examples of which have recently sold for as low as $144 and $800.

Like the 1947 coin, the 1948 Washington quarter dollar struck at the Philadelphia Mint is also common in nearly all grades, and the collection’s representative, PCGS-graded MS-68+ with a CAC sticker, was the sole finest-graded at that service. The toning on the 1948 quarter was show-stopping, especially on the obverse, “with a full endowment of intense steel-lilac, salmon-pink and golden-olive iridescence,” while the reverse’s color was limited to the peripheries. Visually impressive beyond its status as a condition rarity, it sold for $43,200.

Another “top-pop” coin in the offering was a 1945-D Washington quarter dollar that is the sole MS-68 of the relatively common Denver Mint issue at PCGS, with none finer. It was described as “breathtakingly beautiful” by the cataloger, who wrote, “this awe-inspiring Superb Gem offers not only superior technical quality, but also outstanding eye appeal.” Stack’s Bowers added, “The peripheries are splashed with vivid multicolored toning that gives way to softer powder blue and antique silver iridescence in the centers.” It sold for $20,400. 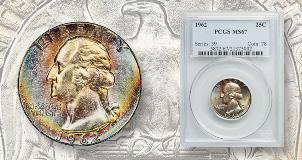 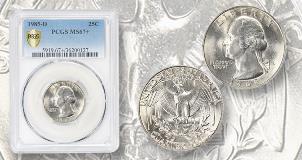 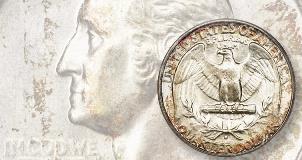