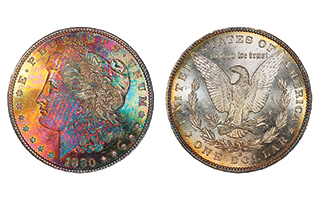 Gorgeous toning can make a silver coin sell for many multiples of what a brilliant, untoned example of the same coin may sell for.

At Legend-Morphys Feb. 13 Regency Auction VI, an 1880-S Morgan dollar graded Mint State 66 with a green Certified Acceptance Corp. sticker (the latter signaling quality within the grade) brought $5,875. A "normal" example of this generally common issue in this grade might sell at the $350 to $400 level.

The difference was that the obverse had magnificent toning complete with cloth bag imprints that provide an indicator of originality. Many Morgan dollars were stored for decades in cloth bags. Coins that touched the outside of the bag sometimes toned with magnificent results.

As with this dollar, typically just one side exhibits the "wow" toning, while the other side has modest color at the edges. Obverse toning is generally valued higher than reverse toning.

The lot was excitedly described as follows: "The rainbow electric bursts of violet/gold/blue/pearl green/amber will make your head spin!" It had that effect on several bidders and easily surpassed its estimate of $3,250 and up.

An 1881-S Morgan dollar graded PCGS MS-66 with a green CAC sticker had higher expectations, with an estimate of $3,750 and up. Its color was slightly darker, with peach shades transforming to deep purple, with the full rainbow spectrum in between.

It sold for $3,818.75 — less than the similarly graded 1880-S dollar but still many multiples of what it would sell for if untoned or lightly toned.