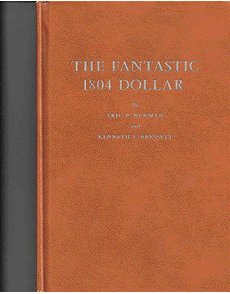 The Fantastic 1804 Dollar spurred new enthusiasm for the mysterious coins.

U.S. Mint records indicated 19,570 pieces were struck, yet only 15, of three different types, could be traced. This minuscule survival rate prompted fanciful theories to explain their disappearance, such as the shipwreck of a vessel carrying payroll for sailors fighting the Barbary pirates. A more prosaic explanation held that the dollars were melted, since their silver content was worth more than their face value.

However, sharp-eyed numismatists noticed that 1804 dollars had certain features in common with dollars struck in the 1830s, and wondered if they had been struck after 1804. In its first edition, A Guide Book of United States Coins summarized various theories, and concluded: “The 1804 dollar has been and probably will continue to be a subject of much discussion. Unless some new evidence is uncovered, the mystery of its existence or disappearance will always be a matter of speculation for the numismatic fraternity.”

In the mid-1950s, Newman and Bressett began seeking that new evidence, joining forces and conducting research at the Mint, in public archives, and in thousands of numismatic periodicals and auction catalogs. The truth they uncovered about the 1804 dollar was, well, fantastic. They confirmed that 19,570 dollars were struck in 1804, but all were dated 1803, for the Mint used old dies until they shattered. After this run was completed, dollar production was suspended with most melted for their silver. Thus, no 1804-dated dollars were struck in 1804. They were first struck in 1834 to 1835, for sets of U.S. coinage to be distributed to the kings of Siam, Cochin-China, Muscat and Japan.

Mint officials were ordered to prepare complete sets of U.S. coinage as diplomatic gifts, and dollars, though suspended, were still an authorized issue. Records indicated that dollars had last been coined in 1804, and since no one at the Mint recalled that those dollars had actually been dated 1803, they made new dies dated 1804. Eight “Type 1” dollars were struck from these dies; four were sent as gifts on the 1835 diplomatic mission, and four kept in reserve. The sole “Type 2” example came from a different reverse die. The six “Type 3” dollars differed from the Type 2 only in that they have lettered edges.

Both Types 2 and 3 were secretly struck by Mint employees around 1858 for sale to collectors. The authors even named the workers who used public resources for their private gain.

Newman and Bressett concluded that 1804 dollars are fantasies with no original counterpart. They closed their book with a memorable condemnation: “There are no genuine 1804 dollars, and those struck from Mint-made dies which bear that date are antedated fantasies. The ‘King of American Coins’ is an impostor, but was made for a king.”

Though the authors exposed the 1804 dollar as a concoction, collectors loved them all the more. In 1962, when The Fantastic 1804 Dollar was published, the coins were bringing about $30,000 at auction. In 1998, a Type 1 specimen sold at auction for 138 times as much! Even though they are pretenders, 1804 dollars are still regarded as numismatic royalty.