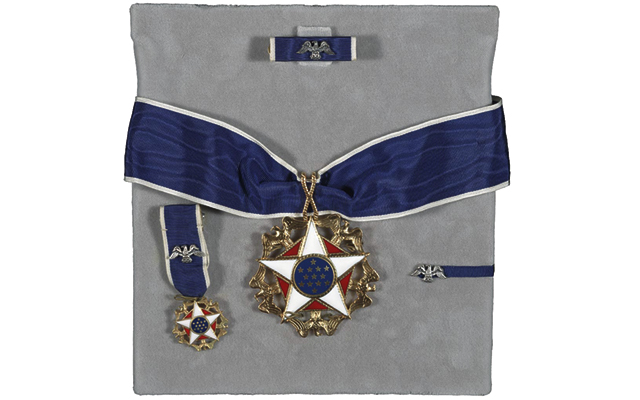 The Presidential Medal of Freedom was presented to Maya Angelou by President Barack Obama in 2010.

Wikimedia Commons image courtesy of the Library of Congress

Presidential Medal of Freedom recipient Maya Angelou, a poet and civil rights activist, died Wednesday at the age of 86, according to multiple media reports including CNN.com.

CNN reports Angelou had been suffering from heart issues.

Angelou was honored with the Presidential Medal of Freedom by President Barack Obama in 2010.

The Presidential Medal of Freedom has been awarded since 1963, when an executive order by President John F. Kennedy revived the medal that had originally been created by President Harry Truman in 1945 to recognize World War II service people.

The centerpiece of the medal is a white, five-pointed star.

"For years the white star has been displayed throughout the world as the identifying emblem of United States elements in the defense of freedom,” the JFK Library’s website reads. "It is recognized universally as a symbol of our selfless determination to maintain the freedom and democracy of mankind.”

Within the white star is a blue circle filled with 13 gold stars, and surrounding it are gold eagles that fill the spaces between the star’s five points.

The medal hangs from a blue ribbon with white edging.

Angelou was awarded the National Medal of Arts in 2000.

Other notable numismatic items obtained by Angelou are a 1994 NAACP Spingarn Medal, a 2000 National Medal of Arts, and a 2008 Ford’s Theatre Lincoln Medal.

"The Ford’s Theatre Lincoln Medal is an annual award given to individuals who, through their body of work, accomplishments or personal attributes, exemplify the lasting legacy, and mettle of character embodied by the most beloved President in our Nation’s history, President Abraham Lincoln,” the Ford’s Theatre website reads.