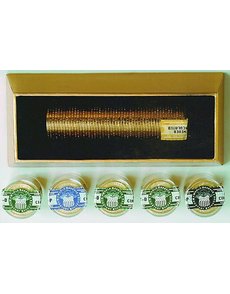 Privately created packaging is being used by an Ohio firm to market rolls of the Presidential dollar coins. The firm began selling the coins in 2007.

I recently came across the following coins that were offered to me for sale from a local buyer.

I am wondering if you have additional details on these and if they are genuine.

The image sent shows normal United States Presidential dollar coins that have been repackaged for sale.

The company that created these packages is the World Monetary Reserve Exchange, which has a headquarters in Canton, Ohio. The company was established in 2002.

This business is a private corporation not affiliated with the United States government.

In 2007, and as further coins in the Presidential dollar coin series were released, this company sold the coins via newspaper and other advertisements, at significant premiums over face value. The company paired the coins with distinctive packaging to add perceived value.

From the photo, it appears that one of the boxes was made in the shape of a gold bar, suggesting that the dollars were perhaps gold. However, the coins themselves do not contain any gold.

The Presidential $1 Coin Act of 2005 required the U.S. Mint to issue new dollar coins beginning in 2007. The coins commemorate four presidents each year, issued in order of the period of service, beginning with George Washington.

The program will take 10 to 12 years to complete, depending on whether any of the current living former presidents have died by the time their coin would be expected to appear. A former president must be dead at least two years before a coin can be issued as part of the ongoing series. A sitting president cannot be depicted on a coin.

The circulating Presidential dollars have the same weight and size as the current Sacagawea/Native American dollars. They are made of a manganese-brass copper clad composition.

Those in Congress who advocated the coins had hoped that they would be popular and circulate as widely as the State quarter dollars.

However, Presidential dollar production for circulation was suspended Dec. 13, 2011, by Treasury Secretary Timothy F. Geithner because a glut of the coins fills Federal Reserve Bank storage facilities. The coins never circulated as widely as advocates had hoped. Circulation-quality production since the 2011 suspension order has been reserved strictly for numismatic sales; the coins are sold for slight premiums via the U.S. Mint.